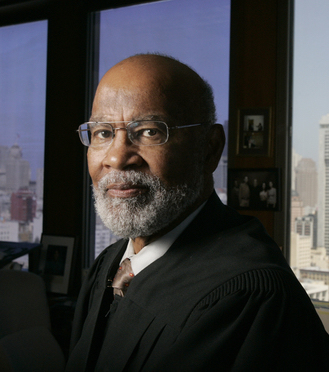 A California native, Judge Thelton E. Henderson was a pioneer in the civil rights movement before being appointed to the federal bench.  After graduating from UC Berkeley, he became the first African-American lawyer in the Civil Rights Division in the Department of Justice.

While monitoring abuses by law enforcement in the South, he became acquainted with Dr. Martin Luther King, Jr. and other civil rights leaders.  He then returned to California, becoming the assistant dean at Stanford, where he established a successful program to recruit a more diverse student body.

After a few years in private practice, Judge Henderson was nominated to the U.S. District Court by Jimmy Carter in 1980.  In his storied career, he has overseen several high-profile cases, including the 1997 case in which he ruled that Proposition 209, the anti-affirmative action initiative, was unconstitutional. The Thelton E. Henderson Center for Social Justice at Boalt Hall is named for him.