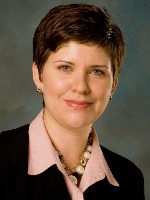 Dr. Melinda Jackson joined the San José State University faculty in 2005 after earning her Ph.D. with concentrations in American Politics, Research Methods, and Political Psychology, from the University of Minnesota.

Dr. Jackson's interests center on public opinion and political participation in American politics with a special focus on political psychology and political identity. She has published research on these topics in a variety of academic journals and books.

In her free time she enjoys playing with her two wonderful and amazing daughters. A native of northern California, she is very happy to be back in the Bay Area enjoying the mild winters again!