Steinbeck Aficionado, teacher, and collector Lee Richard (“Dick”) Hayman lovingly and diligently amassed a huge and variegated collection of John Steinbeck-related materials for more than 50 years, beginning in the early 1960s.  Mr. Hayman generously donated his extensive collection to the Martha Heasley Cox Center for Steinbeck Studies in 2004, where it will be available for researchers soon.

Born in Indianapolis in 1922, Mr. Hayman moved to what he called the “salubrious part of the world,” the Pacific Coast, in late 1958. He taught English at Salinas High School and was an active board member of the Steinbeck Foundation in Salinas.  His avocation for anything and everything Steinbeckian eventually led him to collaborate on several books and, beginning in 1971, to teach “the World of John Steinbeck,” a survey of Steinbeck’s life and works, at Pepperdine University and the University of California at Santa Cruz, as well as at Salinas High School.  Hayman was probably best known toSteinbeck Newsletter and Steinbeck Studies readers for his regular column “Again Please?” in which he used his biting wit to set straight errors and myths about Steinbeck’s life and work that appeared in the popular media.

A believer that anything by and about Steinbeck belonged in his collection, Hayman built up a striking array of written material and memorabilia.  Hayman’s collection contains many items that any self-respecting Steinbeck collector would want, such as the over 2000 primary and secondary books, including signed firsts and other rare editions.  But Mr. Hayman also had a keen eye for ephemera, and filled numerous boxes and filing cabinet drawers with magazines, newspaper clippings, catalogues, pamphlets, photographs, and audio-visual materials.

Hayman’s legacy of collecting Steinbeck, which ranges from a Shqipe (Albanian) translation of The Grapes of Wrath to five boxes of newspaper articles to needlepoint creations, will serve in perpetuity as a rich resource for Steinbeck researchers and casual browsers at the Center.  The passion of a collector such as Mr. Hayman may be eccentric and consuming in the moment, but it also becomes an invaluable resource to later generations.  It is our good fortune that Mr. Hayman was so passionately preoccupied for so many years. 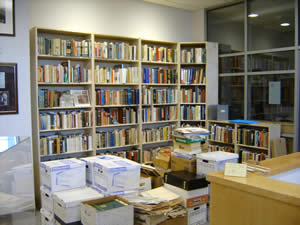 Brief Description of the Collection

Books and other writings by John Steinbeck:  Included are books and pamphlets by Steinbeck, books with contributions by Steinbeck (anthologies, introductions, cookbooks, etc.), and periodical articles/short stories/opinions by Steinbeck.  Hayman collected many first editions, including a signed first edition of East of Eden, as well as foreign editions in over 20 languages (from western European languages to Hebrew to Thai).

Books or other written material about or related to John Steinbeck :  Included are all major biographies devoted to Steinbeck and literary criticisms on John Steinbeck’s works.  Also in this category are the biographies of Steinbeck’s family and associates and genre material, i.e. the Depression, the Dust Bowl, Migrant workers, and California.

Ephemera material associated with the life and works of John Steinbeck:  Included are a wide array of ephemera ranging from book publisher’s posters to film and theatre performances (playbills and articles) to bookseller catalogues.

Other works in various formats connected to the life and career of John Steinbeck:  Included in this category are audio-visual material and miscellanea.  Unique to this collection are the taped interviews by Lee Richard Hayman with those who knew Steinbeck in his younger years and with friends of the Steinbeck family.