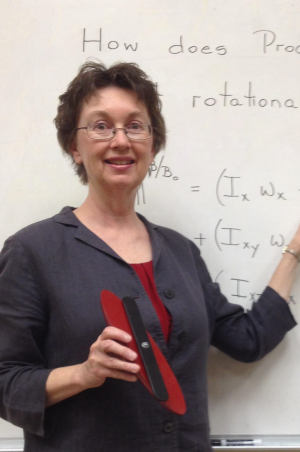 Jeanine Hunter has professional experience with spacecraft, aircraft and rotorcraft.

At NASA Ames, she researched and tested V/STOL autopilot and head-up display concepts. For the motion-based simulation effort she derived the ten degree-of-freedom nonlinear equations of motion of a helicopter carrying an externally suspended load (e.g., fire retardant).

At TRW, she carried out analysis of aerospace vehicle flight test results using system identification algorithms and Kalman filter trajectory reconstruction techniques. In 1988, she became lead of the Guidance, Navigation and Control Section.

In 1989 she joined the newly formed SJSU Aerospace Engineering Department. She developed and taught classes in dynamics, control, design and experimental methods. In 1994, the students in her spacecraft design class led the development and construction of Spartnik, an uncontrolled octagonal nanosatellite whose payloads were a gamma ray detector and a digital camera. Her graduate students built and tested a VHF antenna located on the roof of the engineering building and demonstrated the estimation of spacecraft orbital elements from Doppler recovered from the downlink signal.

In 2014, she introduced an undergraduate course in vector-based dynamics (AE138) based on the ground-breaking work of Dr. Thomas Kane of Stanford University. She is part of a vector dynamics working group including Dr. Paul Mitiguy (Stanford University) and Dr. Burford Furman (SJSU Mechanical Engineering). The working group’s objective is to encourage and enable much-needed improvements in dynamics education for all engineering students.

Using vector-based particle dynamics she developed undergraduate and graduate courses in astrodynamics. In a field that often uses a collection of scalar equations, the vector approach provides clarity and give students confidence in their ability to derive equations of motion.

She is also a private pilot.