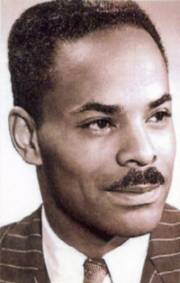 Mr. Byrd graduated from Lincoln High School in Kansas City, Missouri. He then attended Northwestern University for two years and later received his Bachelor of Science Degree. He earned his Master’s degree from the University of Chicago where he eventually took a research sabbatical at the University of Hamburg in Germany. While attending the University of Hamburg he developed an outstanding collection of formulae related to the field of “special functions” of interest to both pure and applied Mathematics. He was working on a doctorate degree when World War II began and he enlisted in the Army, became an officer, and worked as a Meteorologist. In 1944, Mr. Byrd was wounded in Italy but recovered from his injuries.

Before his death, Mr. Byrd spent his time teaching and helping students. The Byrd Scholarship was established by his son, Bruce Byrd, in memory of Paul Francis Byrd. The scholarship aims at providing outstanding students with their academic endeavors.  Mr. Byrd’s legacy will continue to live on and the memory of his contributions to education will never be forgotten.

*If this office is closed, for immediate assistance go to the College of Social Sciences Dean’s office in WSQ 103
Phone: (408) 924-5300
Email: college-socialsciences@sjsu.edu

Give to AFAM at SJSU