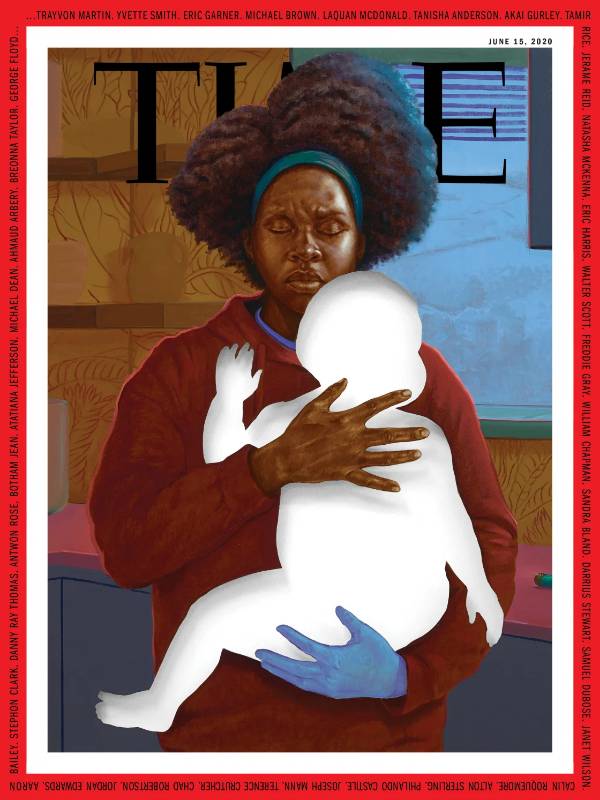 'I Cannot Sell You This Painting.' Artist Titus Kaphar on his George Floyd TIME Cover.

SJSU Digital Media Art major Genki Hagata is about to make a 350 mile bike ride from San Jose to Santa Barbara, capturing the event on a small camera which Hagata will be wearing on his ride. The ride will be reproduced for gallery goers-who ride a stationary bike installed in Hagata's BFA gallery. To learn about Genki Hagata's Kickstarter campaign, click here.

In 2011, San José State University’s Department of Art and Art History celebrated its centennial anniversary, an occasion that has been marked with a series of exhibitions, programs and projects, both on and off campus. Community Matters: SJSU Alumni in San José is the last in a series of exhibitions that were created to showcase the Art Department’s long history, to celebrate a century’s worth of achievements, and to welcome the next one hundred years of artistic endeavor and innovation.

Spatial Art lecturer Ryan Carrington was awarded the 2014 Silicon Valley Creates Emerging Artist Award. Emeritus Spatial Art professor, Consuelo Underwood, was awarded the Artist Laureate Award for her  work in textiles and installation. Both were honored at a ceremony at the Zero1 Garage on May 27, 2014.

The work of three SJSU Art and Art History Department students is currently on exhibit at the National Veterans Art Museum in Chicago. Mark Pinto, a 2014 Photography MFA graduate; Amanda Brannon, a 2014 Spatial Art BFA graduate, and Roger Ourthiague, a Pictorial BFA student, collaborated on an "Exquisite Corpse" for the exhibition. See the story in the Huffington Post.

Spatial Art students had their inaugural experience as Exhibitors at Maker Faire Bay Area 2014, in May.  While the Ceramics, Glass and Small Metals students worked with attendees on body casting and building a clay "exquisite corpse," students from Professor Wright's Installation Art class built a small beach and operated large interactive sculptures. Installation Art students Tomoko Shiino, Michelle Frey, Richard Mendez and Camille Campos-Shanahan created a life-sized Foosball game which was awarded a Best In Class award for Interactive Projects. The Spatial Art students working with the body casting and the exquisite corpse, also won a Best in Class award. Congratulations, all-- and we will be back next year!

Scotty Gorham (MFA Digital Media Art) showed his interactive light installation Pulse as part of "Data Exchange" this May at the ZERO1 Garage in San Jose.  Several other DMA students participated in the exhibit as part of Professor Joel Slayton's class.  For more images and information on Pulse visit scottygorham.com/pulse.

Eleven MFA students and three BFA students from SJSU's Department of Art and Art History have been selected to exhibit in this year's Annual Student Showcase at the de Young Museum in San Francisco.  The event is free and open to the public.

Four MFA students from SJSU's Department of Art and Art History have been selected to exhibit their work in MFA Now 2014. Alyssa Eustaquio, Ninh Filip, Mark Pinto and Biagio Scarpello will exhibit their work in sculpture and photography in the exhibition. According to the US News and World Report survey from 2013, the Bay Area is home to seven of the top one hundred MFA programs in Visual Arts in the country: California College of the Arts, Mills College, San Francisco Art Institute, San Francisco State University, San Jose State University, Stanford University and the University of California, Berkeley.

Mark Pinto, a 3rd year grad student in the Photography department was recently selected from amongst military veteran artists from across the US to be featured in the first Veteran's Art Show at the Pentagon in Washington DC. The juried art show, which opened on Nov 11, 2013, Veterans Day, will run for a year and be visible to the thousands of Pentagon employees as well as the public on the Pentagon tour. Pinto's art work is a digital photograph titled "Homeless Joe", part of a 10 picture series depicting the difficulties of veterans as they are reintegrated into society. Each photo uses the GI Joe action figures, as a way of disarming the viewer, and bringing them closer to the work. When asked about the show, Pinto said, "As a Marine, I spent some time at the Pentagon, and now for me to have a photograph there is very satisfying." He went on to say that he was surprised and happy that the Pentagon has chosen his work which has a strong anti-war message. "Because my work wasn't the traditional patriotic work, there was a lot of behind the scenes meetings and delays to the opening of the show, which was originally slated for March 2013" Pinto said.

Mark Pinto is a retired Marine helicopter pilot, Gulf War veteran and former Buddhist priest. He plans to graduate in May 2014 with his MFA in Photography.

November 2013
Creativity, Change, Commitment: A Celebration of 100 Years of the Department of Art

Available through the Thompson Art Gallery; make checks payable to the Gallery and mail to:

For further information, please contact Professor Hernandez at 408.924.4328 or jo.hernandez@sjsu.edu.

SJSU Art at the Humanities and the Arts Student Showcase

Students from the Department of Art and Art History showed off their skills at this year's College of Humanities and the Arts Student Showcase. Click here to read the article in SJSU Today. Below: Spatial Art BFA student Matthew Eaton blows glass for an audience in the Art Quad.

Jonathan Huang, Spatial MFA Graduate 2013, received Honorable Mention in this year's International Sculpture Center Student Competition. Over 200 graduate students were were nominated by their professors from over 50 countries, only five were selected for an honorable mention. Jonathan's installations seek to induce empathy, and contemplation, on behalf of victims of sex trafficking.

The Department of Art - The Graphic Eye

This exhibit is one of several on campus organized to celebrate the centennial of the founding of the art department in 1911, a part of what was then the San José Normal School, an institution aimed primarily at educating future teachers.  The department grew and diversified as the decades passed and the School evolved into the San José State Teachers College, then into San José State College, and finally, in 1972, to San José State University. An early and ongoing commitment to the funding of public education in California made this, for a time, the largest and most important public art school in the Western United States, as well as the largest unit on campus, with a range of facilities which made it possible to encourage a wide range of creative endeavors exploring a range of media, aesthetic, genre, and technique.

The posters in this exhibition, dating mostly from the 1970s and ‘80s, give testimony to a particularly flourishing and productive period in the history of art and design at SJSU.  Conceptualized and designed by teachers and students, they were produced to publicize a wide range of department events, exhibitions, and programs. Graphically compelling and evocative, they demonstrate the lively and sometimes irreverent creative spirit of students and faculty alike.

Poster design by Sam Smidt for the First National Invitational Photography Exhibition at San José State College back in 1967.

SJSU Photography faculty member Robert Dawson has received a 2013 Visual Arts Award form the Creative Work Fund. The grant will support a collaborative project between Dawson and the Library and Literacy Foundation for San Joaquin County.

Jordan Anthony Gonzales has been named the 2013-14 Trustee William Hauck Scholar, one of 23 CSU Trustees Awards for Outstanding Achievement.

“Picturing Our Library: Watercolors by SJSU Art Students,” an exhibition featuring 18 of the student watercolors, opens Sept. 3 on the fourth floor, and will continue through the end of the month. Rendered this spring, these paintings captures the remarkable vantage points of interior and exterior landscapes of the King Library.

In July, 2013, Spatial Art graduate student Nathan Cox participated in ArtLab ROJAL, a 2-week residency in Roja Municipality, Latvia. This event brought together 11 international artists to create public works in a variety of media, each inspired by the town and its surroundings.

SJSU MFA Grads in NEXTNEWCA at the San José ICA.

One project, called “Quakebot,” visualizes recent earthquake activity by using CNC technology to physically “poke” epicenters into a miniature sandbox in the shape of California.

A collaborative project called the “Litewall” includes the contribution of over 90 people, each building a super-sized pixel. This giant “DIY” pixel screen was created to allow art students to write their own software programs, including interactive games.

Nineteen graduating Master of Fine Arts students from SJSU’s Department of Art and Art History are featured in the current issue of Content Magazine. To read the article, click here. The students will exhibit their thesis art projects at Art Ark Gallery from May 3-19, 2013. Designed by independent curator and art writer Christian L. Frock, the exhibit illustrates the depth and breath of the department’s MFA program.

The MFA studio art students collaborated with MA art history graduate students to produce a 100-page publication for the Lift-Off 2013 exhibition.  Copies will be available at the exhibition and can be ordered here.

Above: Spatial Art MFA student Biagio Scarpello with his piece, “Stress Relief,” which was awarded first prize in last year’s student showcase at the de Young. Images via Flickr.

The SJSU Sculpture Guild will host its bi-annual Iron Pour at the SJSU Art Foundry, located at 1036 S. 5th St in San Jose. Students and faculty from Mission and Gavilan College will join SJSU Spatial Art faculty and students in this half-day event, with hot metal at 1pm.  For information about observing the iron pour, please contact Spatial Art Lecturer Ryan Carrington at rtcarrington@gmail.com.

Filmmaker and artist Mandl will discuss her work in light of how her history of working in the entertainment industry has shaped her process as a fine artist. She works in a variety of media, including painting, sculpture, and installation, stop-motion animation and puppeteering; much of it has the quality of fairytales that collide with technology. Mandl will also have an exhibition in the Freight and Cargo Galleries at the SJSU Foundry, opening April 4, 6.30-8.30.

Students in Pictorial Art have resumed work on their “Better Than Blue” mural project, painted on a section of blue construction wall surrounding the Student Union. The students are recreating artists’ self-portraits that they have selected. The collection includes work from important European, Southeast Asian, North and Central American artists from the fifteenth through the twentieth centuries. Students pictured: Stephen Leber, Brandy Damian, Charles Thompson and Shannon Belardi are painting the portraits of Anita Rée, Egon Schiele, Suzanne Valadon and Henri Matisse.

Eighteen graduating MFA candidates from the Department of Art and Art History presented their work to the public at a “Pechakucha” Night at Café Stritch in downtown San Jose. PechaKucha is a global phenomenon in which participants discuss 20 images for 20 seconds each before an audience. Artists pictured above, left to right: Esteban Salazar, Kat MacKinnon, Jeffrey Opp, Meiru Huang, and Wesley Wright.