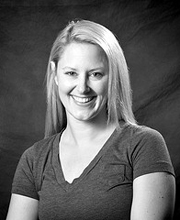 Jill Yager is a dancer, choreographer, and instructor of Jazz I, II, and III. She earned a BS in Kinesiology with a Minor in Dance from San José State University. Performance credits include Best from the Bay: A Community Concert for Dance Educators of America, Hotel Sofitel's April in Paris, Bastille Day Celebrations, and the Grand Opening and Spirit of Spring fashion shows in Riverside, CA. She toured the U.S. as a featured dancer for pop artist Jossette from 1996 to 1998. She choreographed A Fosse Affair, With Love and Legends (2004-2006) for Pure Dance Productions in San José, and was a guest choreographer for Presentation High School's dance team (2005-2006). She also choreographed three pieces for San José State's University Dance Theatre (2004-2006), two of which were selected for adjudication at the American College Dance Festival and one being selected for the Gala performance at ACDF in Long Beach, CA. She is currently teaching jazz and tap at South Bay Dance Center in San José.