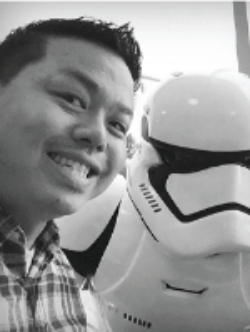 David Yee was born and raised in the San Francisco Bay Area. He completed his undergraduate studies at San Jose State University in 2001 and received his MFA degree from the University of Hartford in 2014.

The majority of his career has been spent working in the art department at Industrial Light and Magic (ILM), George Lucas’ visual effects company. Here, he’s worked in a variety of positions including art assistant, concept artist, and art director on projects such as Van Helsing (2004), Star Wars Episode 3:Revenge of the Sith (2005), Indiana Jones and the Kingdom of the Crystal Skull (2008), Star Trek (2009), Super 8 (2011), Star Wars: The Force Awakens (2015), Rogue One: A Star Wars Story (2016), and Star Wars: The Last Jedi (2017). He’s also spent time working as a freelance artist in the video game industry as well as a digital artist in the marketing department at Apple Inc.

In 2007, David began teaching as an adjunct professor at SJSU and joined the faculty full time as an assistant professor in 2017.