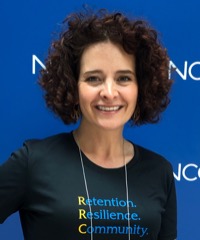 Fernanda Perdomo-Arciniegas (she/her/hers/ella) is our Deputy Diversity Officer and has worked in the Office of Diversity, Equity and Inclusion since 2017. From October 2021 to September 2022, Fernanda was assigned the role of Interim Director of Chicanx/Latinx Equity with the goal of supporting Chicanx/Latinx student, faculty, and staff success. She also supports and implements initiatives from the Office of Diversity, Equity and Inclusion, working closely with administrators and campus stakeholders; her areas of focus are campus and community civic engagement, staff professional development, international, undocumented and Latin* students/faculty/staff sense of belonging.

Perdomo-Arciniegas has worked at SJSU for 20 years, most recently serving as director for campus and community relations since 2012. She has spearheaded campus-wide events such as the Advancing Latinx Success (ALAS) Conference, College Day Family and Community Conference, Es El Momento Fair and other CSU initiatives.

She has received numerous awards and formal recognitions from the California State Assembly, the Santa Clara Board of Supervisors, the Latino Leadership Alliance Program and the APALI Civic Leadership Program. In 2015, she received the Arthur Dunklin Diversity Champion Award, given in recognition for her extensive work supporting diversity and inclusive excellence at SJSU and the community.

She has served on several internal and external committees, including the President’s Commission on Diversity, Economic Crisis Resource Team, CommUniverCity Board of Directors, Job and Educational Development Initiative and more. She has also served on community boards such as the Latina Coalition Silicon Valley Board and Sabor del Valle Board. She is currently a member of Papeles Para Todxs, a national coalition that seeks citizenship for all, as well as, part of the Our Voice, Rights, and Vote (Nuestra Voz, Derechos y Voto) a movement that seeks to strengthen community engagement and sense of belonging by expanding the vote in the City of San José. She is also a leader in the ColombianAmerican community and is working the Colombian Diaspora and the Mexican American community to support the recent immigrant arrivals from Colombia to the City of San José.

Perdomo-Arciniegas earned a bachelor's in mathematics (statistics) and a master's in public administration from SJSU and studied law at the Universidad Externado de Colombia. She has completed specialized management training in leading transformation and change through the Management Development Program (MDP) at Harvard University's Graduate School of Education, certified by the Intergroup Dialogue Institute at Cornell University, participated in the Asian Pacific American Leadership Institute Community Civic Leadership program and is a graduate fellow of the Latino Board Leadership Academy, organized through the Hispanic Foundation of Silicon Valley. She is a Public Voices Fellow with the OpEd Project and has been published in the San José Mercury News. She is also a Core Coach for USAFIT San José, a national organization that helps folxs train for half-marathons, marathons, and ultra-marathons.