The general goal of the Eggers laboratory is to study the effects of crowding agents, solutes, and biological surfaces on the thermodynamic properties of water and to evaluate the consequence of altered water properties on molecular interactions. Isothermal titration calorimetry (ITC) and microscale thermophoresis (MST) are two of the favored lab techniques for pursuing this research aim. Other research tools include CD spectroscopy, differential scanning calorimetry (DSC), and sol-gel glass encapsulation of proteins.

Role of Bulk Water in Binding and Conformational Equilibria

The Eggers Laboratory treats water explicitly as a co-reactant and co-product for all aqueous reaction equilibria. A key motivating factor for this treatment is the knowledge that water structure is altered at a boundary, i.e. the network of hydrogen-bonded water molecules near a surface or solute is perturbed relative to the bulk phase, and changes in the physical and thermodynamic properties of water are expected to accompany this rearrangement. For the hypothetical binding reaction shown below, a sphere of perturbed water molecules surrounds reactant A, reactant B, and their product, complex AB. In general, the average structure of the water within each sphere is altered relative to the bulk water outside the sphere. The water molecules within the spheres are given different colors to emphasize the fact that these water molecules also differ from each other; the perturbed water structure will reflect the specific surface chemistry of each reactant.

In the case of chemical reactions, where covalent bonds are broken and/or formed, the solvent contribution to the total free energy change of the reaction may be negligible. In the case of conformational equilibria or binding equilibria, however, water may dictate the position of the equilibrium for the overall reaction. Consequently, release of water to the bulk phase may be extremely important in biological systems where nearly all reactions are mediated by changes in conformation of, or binding to, macromolecules. One important outcome of this work is the realization that the binding "constant," as defined by classical thermodynamics, is not actually a constant; the contribution of water is proportional to the moles of complex formed, and, therefore, the equilibrium ratio is expected to increase or decrease with changing reactant concentrations.

Solute Effects and the Hofmeister Series

The Eggers laboratory strives to understand how small solutes mediate their effects on biomolecules. Of special interest are natural osmolytes, soluble crowding agents, and salt combinations from the well-known Hofmeister series of ions. The two ionic series below are ranked such that the ions having the most favorable effects on protein stability are on the left and those having the most destabilizing effects are on the right. The underlying basis for the Hofmeister series has been debated often, but we hypothesize that the effect of the favorable ions in each series is mediated through their favorable effect on the free energy of bulk water. 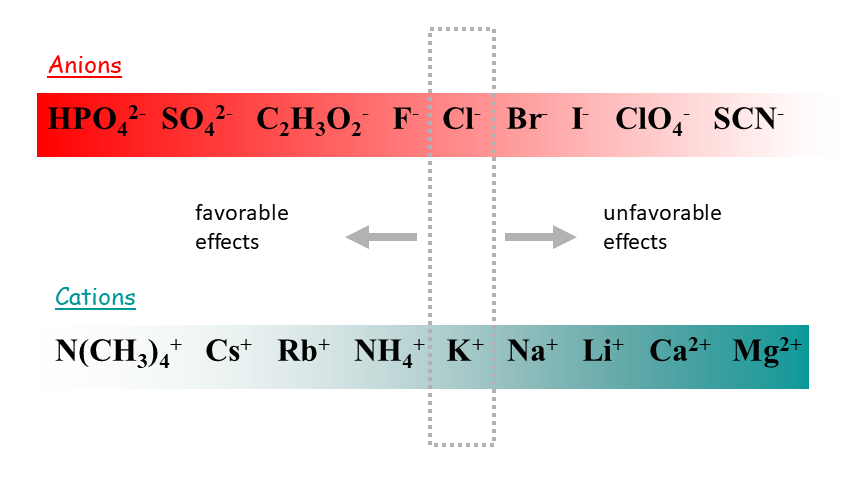 The Eggers laboratory is currently pursuing a combination of thermodynamic techniques, including calorimetry, to try and back out the free energy of bulk water as a function of solute concentration and identity. Because the cytoplasm of a living cell is highly concentrated, we believe that studies aimed at characterizing concentrated (non-ideal) solutions are a necessary step toward understanding the underpinnings of cell biology.