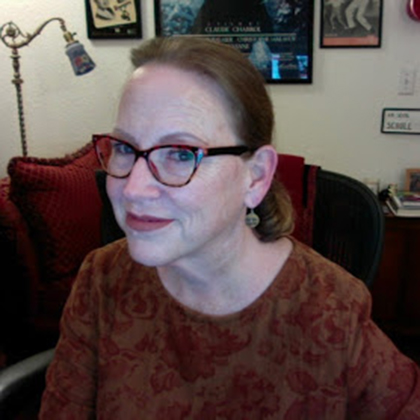 Dr. Alison L. McKee is a Professor in the Radio-Television Film program at San José State University. She specializes in American film history, theory, criticism, and research.  Professor McKee earned a B.A. and M.A in English from the University of California, Santa Barbara and went on to get a Ph.D. in film and media studies at UCLA, focusing particularly on film history, narrative, and gender issues in classical American cinema. She presents regularly at national and international conferences and is frequently invited to speak in the U.S. and abroad on her areas of expertise. She also writes and publishes romance under a pen name.

McKee's work has appeared in numerous national and international journals and books. Among them are  “The Price of Salt, Carol, and Queer Narrative Desire(s)”  in Patricia Highsmith, Film, and Adaptation (eds. Wieland Schwanebeck and Douglas McFarland, Macmillan 2018), The Woman's Film of the 1940s: Gender, Narrative, and History (Routledge, 2014), “’Think of Me Fondly’: Voice, Body, Affect, and Performance in Prince/Lloyd Webber’s The Phantom of the Opera,” Studies in Musical Theatre 7:3 2014, and a chapter in New Zealand Cinema: Interpreting the Past (eds. Alistair Fox, Barry Keith Grant, Hilary Radner, Intellect UK/The Chicago of University Press, 2011). McKee is a SJSU Salzburg Fellow (2009-1010) and the recipient of several grants and awards for her writing and work within film, theatre, and literary studies.

Professor McKee is currently at work on Of an (Un)Certain Age: Spinsters, or the Single Older Woman in 1950s American Cinema. During a decade which is often thought to embody a period of social homogeneity, the figure of the cinematic spinster embodies a range of very real contradictions that characterize this frequently  misunderstood period and draws attention to the many social, political, racial, and economic tensions beneath the surface of a gendered, racialized status quo.

In addition to teaching in the RTVF program, Professor McKee is a faculty advisor for SJSU's award-winning college radio station: 90.5 KSJS-FM. She has also taught and mentored graduate students in Theatre Arts and served as an Associate Director of the School of Music & Dance- RTVF-Theatre Arts-Animation & Illustration (2011-2012).