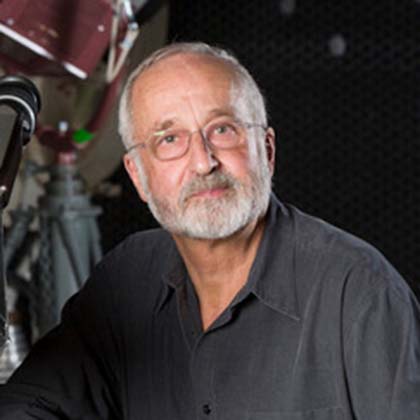 Harry Mathias (MA, BA, San Francisco State University) was the director of photography on feature films, network TV dramatic shows, documentaries, TV and political commercials, and music videos. He is schooled in the classical Hollywood movie traditions of cinematography and lighting and has collaborated with some of the greatest names in the cinema industry. His feature film projects have included drama, comedy, action, and special-effects movies. He was nominated for Oscar for Solly's Diner by the Academy of Motion Picture Arts and Sciences in 1980.

Professor Mathias was also active in the San Francisco avant-garde filmmaking movement. He won a Golden Eagle Award for his documentary about homeless teenagers, Shadow Children. He has filmed documentaries for BBC, CBC, ABC, NBC, CBS, and Swedish Television, as well as KPIX, KQED, and KGO in San Francisco.

Equally skilled in digital cinema technology, Professor Mathias was the senior technical executive at NEC Digital Cinema; the founding top executive of Barco digital cinema; the Director of Motion Picture Technology, worldwide, at Schneider Optics; and the Senior Consultant to four of the CEOs of Panavision. He is a founding member of the Society of Motion Picture and Television Engineers (SMPTE) DC28 and 21DC Digital Cinema standards group. He was made a Life Fellow of the Society for his digital cinema standards work. He has been elected as Director of International Cinema Technology Association for two terms.

Professor Mathias is author of: The Death & Rebirth of Cinema: Mastering The Art of Cinematography in The Digital Cinema Age, published by Waterfront Press, on Dec. 2015, ISBN 978-1943625147 and Electronic Cinematography: Achieving Photographic Control over the Video Image and Cinematografia Electronica; translated into Greek and published as Hilektroniki Kinimatografia, in 2006, and distributed worldwide. He was a contributing author (along with former Vice President Al Gore) to HDTV: The Politics, Policies, and Economics of Tomorrow's Television; and a contributing author to The American Cinematographer Manual, American Cinematographer Video Manual, and the SMPTE book Television Image Quality.

Professor Mathias has written four peer-reviewed Journal articles for SMPTE and other industry scientific organizations. He also wrote numerous articles and published studies for each of the following magazines: The International Photographer, The BKST Journal, Film Journal International, Box Office, On Location, American Cinematographer, and Video Systems Magazines, on which he was the Contributing Editor from 1978 to 1980.

Professor Mathias has given more than 76 invited lectures on film technology and digital cinema worldwide. He also has moderated discussion panels, and for six years toured Internationally to give weeklong seminars on Digital Cinema and Film Image Control Techniques.

Some of his film credits include:

Feature Films as Second Unit Director of Photography
The Right Stuff; Officer and a Gentleman; Annie; One from the Heart; Blue Thunder; The Outsiders (served as camera operator); Man, Woman and Child; White Dog; Looking to Get Out; Airplane; Escape from Alcatraz

The Allen Award 2005 by the International Cinema Technology Association.

The Allen Award 2007 by the International Cinema Technology Association.

The Cine Golden Eagle Award 1991 for Best Documentary, Shadow Children, a documentary about homeless teenagers on the streets in Berkeley. Harry Mathias, Director.