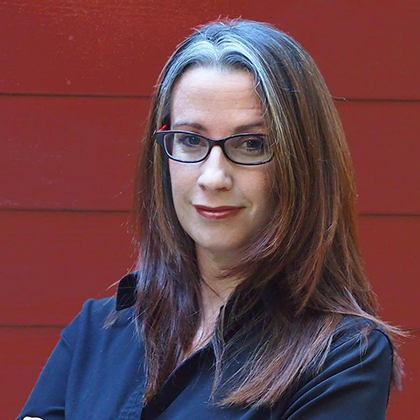 Kirsten Brandt is an interdisciplinary artist and educator whose practice embraces inquiries into gender, technology and politics.  An award-winning theatrical director, playwright, and producer with over 20 years of experience, her passion lies in igniting the imagination of audiences through visceral storytelling and visual poetry to encourage dialogue and ethical engagement. She specializes in Musical Theatre, Experimental Theater, devised and ensemble created events, Shakespeare, and the intersection of live performance and digital media.

For seven years, she served as Executive Artistic Director of the Sledgehammer Theatre (San Diego’s leading alternative theatre) where she produced 25 productions including 11 world premieres such as Kirsten Nash’s musical Alice in Modernland and Kelly Stuart’s Furious Blood, five west coast premieres and directed 15 productions. Her avant-garde, gritty take on Sweet Charity earned her a coveted Backstage West award for her direction. In addition to directing, she wrote The Frankenstein Project which was funded by the National Endowment for the Arts; Berzerkergäng a play based on Richard Wagner’s Ring Cycle; and NU: a play without words for which she received an award for outstanding choreography.

As a playwright, her plays/musicals have been produced at Sledgehammer Theater, Unbound Productions (Wicked Lit), The Old Globe, Southwestern College and the New York Musical Theatre Festival (NYMF). Her rock musical The Snow Queen (co-authored with Rick Lombardo and Haddon Kime) originally premiered at San José Rep and continues to be produced nationally and internationally (available through Stage Rights/Amazon). Her telematic play The Thinning Veil received its premiere at UC Santa Cruz.

She received her BA in Theatre from UC San Diego where she took part in the Education Abroad Program in Birmingham, England.  Her MFA in Interdisciplinary Arts from Goddard College focuses on gender in performance, performative technologies and environmental justice. She is a proud member of the Stage Directors and Choreographers Society, The Dramatists Guild of America and the National Theatre Conference. Ms. Brandt is an Instigator with the Bay Area Women’s Theater Festival 2020 and previously served on the Theatre Bay Area Gender Parity Committee.

Pronouns:
she, her, hers