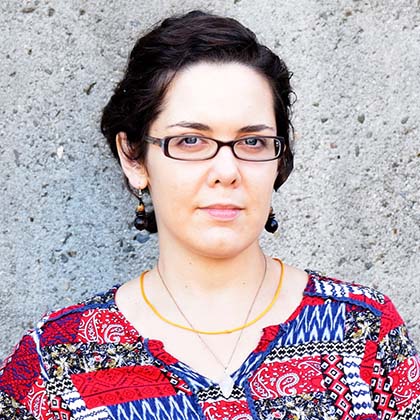 Teresa Veramendi is a multidisciplinary theatre artist, playwright, performer, community facilitator, and educator who utilizes the arts as a tool to interrupt social inequities and rehumanize the other. Writing, producing, directing, and performing her own work over the last twenty years, she manifests her political interrogations of gender, class, nationality, and climate change into visually poetic, documentary, and historical theatre projects. Her expertise lies in her dedication to devised and experimental theatre, body-mind awareness practices, psychophysical acting, and the internationally popular social theatre practice, Theatre of the Oppressed.

Since co-founding Theatre of the Oppressed Chicago in 2012, Veramendi has facilitated over one hundred Theatre of the Oppressed workshops on diverse topics such as class, gender, race, immigration, public education, intersectionality, internalized oppression, electoral politics, and career transitions, in various settings and cities around the country.

In 2018, she was awarded the Boedecker Foundation Path to Excellence Grant to support the development and production of Santuario|Sanctuary, an original bilingual, documentary-style theatre piece following the parallel and divergent experiences of youth and monarch butterflies on their migrations across the USA-Mexico border.

Her work has been performed in Boulder, Chicago, New York, and Buenos Aires. Visit her website www.teresaveramendi.com to view photographs and videos of her work, as well as testimonials from her workshops.