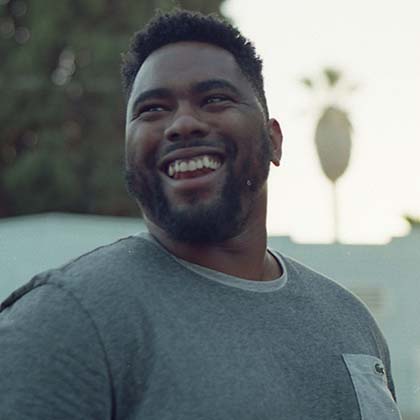 Xavier grew up in the deep south where chain link fences guarded you from the dog snapping at your feet. He’d disappear into the evergreen forests of Mississippi until sunset. He’d emerge for Cowboy Bebop, Final Fantasy 7, and Eve’s Bayou—wondering if these tales could co-exist. Now, he creates adventure and myth–the type of worlds his younger self dreamed about in the rural heat.

Horror Noire: A History Of Black Horror, expounds on the untold history of Black Americans in horror cinema. The film currently holds a 100% Fresh” on Rotten Tomatoes, along with being listed “Best Horror Movies of 2019” by USA Today and Entertainment Weekly. The film won a Trailblazer Award from FEARnyc Film Festival.

He directed an Adult Swim TV Special, Juneteenth With Open Mike Eagle, expounding on the history of the national holiday. The project premiered between episodes of The Boondocks & Black Dynamite.

Xavier cultivated this experience while shadowing on season six of American Horror Story. He was mentored by the show’s veteran director and cinematographer, Michael Goi. This opportunity arose from Xavier’s thesis project, Olde E, earning semi-finalist recognition at The Student Academy Awards.