Looking for a specific course pathway? Here is where you can delve deeper into the various courses that make up our RTVF and Theatre Arts pathways that allow you to customize your degree curriculum.

A minor in Musical Theatre [pdf] provides students with the fundamentals of Musical Theatre and complements a degree in Theatre Arts or allows you to pursue your passion while having a non-theatre major.

For nearly 60 years, 90.5 FM KSJS [pdf] has offered students the opportunity to gain hands-on experience working in a 24/7 FM broadcast and Internet radio station that provides the best alternative to commercial radio programming with its diverse selection of underrepresented music and public affairs. Participation is open to all majors.

Critical Studies in Film and Media 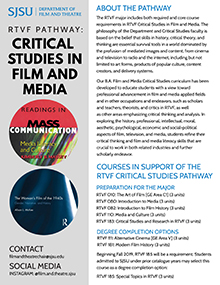 A focus in Critical Studies in Film and Media [pdf] helps students refine their knowledge and skills in film history, critical theory, and media literacy—all of which are vital for careers in film and media-related industries. 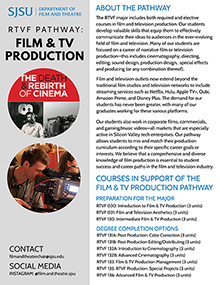 A pathway in Film & Television Production [pdf] focuses on developing the skills needed to communicate narrative ideas to their audiences in the critical areas of cinematography, directing, editing, sound design, production design, special effects, and all types of producing. 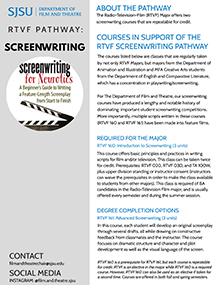 Our Screenwriting [pdf] courses have produced a lengthy and notable history of dominating important student screenwriting competitions. More importantly, multiple scripts written in these courses (RTVF 160 and RTVF 161) have been made into feature films. 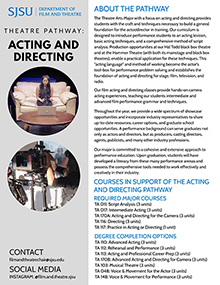 An emphasis in Acting and Directing [pdf] provides students with a strong foundation for acting and directing suitable for all aspects of entertainment, including the stage, film, television, and radio. Students receive hands-on experience by performing in front of the camera and on the stage and/or directing for film or the stage. 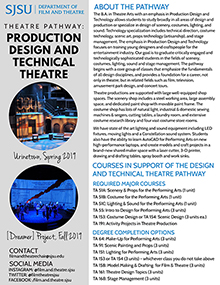 Students who seek a career in Production Design and Technical Theatre [pdf] will receive supportive instruction when taking our design classes that artisitcally and creatively guide students to becoming integral designers and craftspeople who create and work behind the scenes in multiple facets of the entertainment industry.