Harikrishna Patadiya won the Old Guard Oral Competition at the 2013 District D ASME Student Professional Development Conference this past April.  His presentation was on a knee replacement testing device, which was designed and built to simulate wear and tear on knee joints.  According to Patadiya, the device is used to test synthetic knee joints by accelerating them through 5 million cycles, which is equivalent to about 5 years of walking.  It conforms to the ISO 14243 standard, which specifies loading and displacement parameters for such devices.

The knee replacement testing device was a senior project in our department in the 2012-2013 academic year.  The other students on the project team besides Harikrishna were: Erik Gillenwater, Jon Franklin, Hoang Le, William Ebert, and William Powell.  The faculty project advisor was Dr. Raymond Yee.  The faculty advisor for ASME is Dr. Winncy Du.

Patadiya will represent District D in the national Old Guard Oral Competition this November at the ASME 2013 International Mechanical Engineering Congress and Expo, where he will compete for a $2000 prize.  The Old Guard is a long-standing and prestigious ASME tradition. 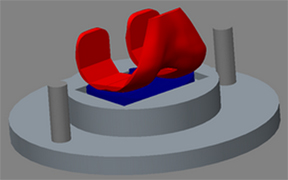 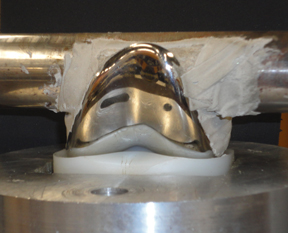