I had no aspirations to be a scientist when I enrolled at San Jose State back in 1970. I wanted a college degree in the physical sciences. I'd worry later about getting a job. You could do that in those days because the world bristled with opportunity then. I picked meteorology because it included a variety of the "hard" sciences, but also had some very real practical applications (forecasting). Maybe I'd become a forecaster I thought. But I had no passion for it, much less talent. So when I graduated I decided to go on for a Master's degree since I liked the science and wanted to learn more. 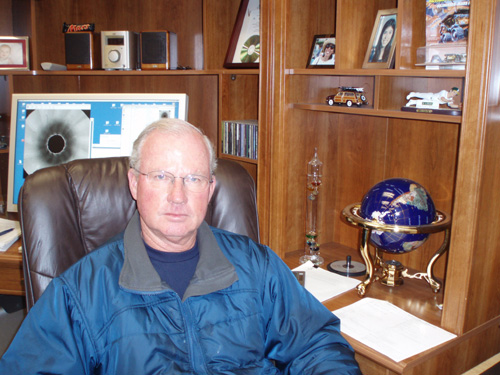 I don't remember exactly when it happened, but it was early in my graduate career when I stumbled upon a scientific journal article about the atmosphere of Venus. I didn't understand the article, but the description of Venus' atmosphere it had absolutely shocked me. Here was a planet with a mean surface pressure of 90 bars (90,000 mb!), surface temperatures approaching 760 Kelvins (~900° F), and atmosphere made mostly of CO 2 . Good lord, I thought! How could that be? I was baffled, but fascinated. I quickly looked up what the other planet's atmospheres were like, and sure enough none were anything like the Earth's. I immediately recognized the potential for the study of planetary atmospheres. Namely, that they offered a laboratory for studying how the processes that govern the origin, evolution, and behavior of atmospheres interact to produce what we see today. Voila! I found my passion.

I then asked the late Professor Riegel, whom I picked as my thesis advisor, if he knew anything about planetary atmospheres and specifically if he knew of any research projects that would be suitable for my Master's thesis. At the time Professor Riegel was working with some scientists at Ames Research Center who were trying to understand the dynamics of the Earth's stratosphere and the effects of super-sonic-transport aircraft on its composition. He was aware of some planetary atmosphere work being done by Dr. James Pollack at Ames and he put me in touch with him. Jim indeed had a project for me: Use boundary layer theory to determine how strong surface winds have to be to lift dust off the surface of Mars. If was a fun project and it introduced me to NASA's spacecraft missions exploring the planets. I was hooked.

From there I went on for a Ph.D. at the University of Washington and eventually came to work for NASA at Ames . It has been a long and rewarding career and I'm still having fun. But it all started with the Meteorology Department and San Jose State . The training, encouragement, and contacts I made there set me off on a path of scientific research. For that, I will always be grateful.