I have been interested in the weather ever since I was in the 4th grade. I enjoyed watching the weather segment on the local evening news, especially on KNTV 11 in San Jose. Local TV Meteorologists like Bill Martin (KTVU, Oakland) and Brian Sussman (previously KNTV, San Jose) inspired me as a child to become a Meteorologist. By watching their weathercasts, I became intrigued and awed by how nature worked, and I definitely wanted to learn more. In my senior year of high school I started to look at the best meteorology programs at colleges around the nation. My final choices were University of Oklahoma, UC Davis, and San Jose State University. Although I had grown up in San Jose, SJSU was my top choice, because I was convinced that their rigorous and NOAA-approved Meteorology program would give me the most knowledge and best preparation for career opportunities in the field.

I finally graduated in May 2000 with a BS degree in Meteorology. I will never forget the day I graduated, since it is the day on which one of my dreams became a reality – I was now a Meteorologist.

I started my post-SJSU career at Applied Weather Technology (AWT) as a Marine Meteorologist, specializing in ship routing and End of Voyage (EOV) forensic weather reconstruction reports. I worked at AWT part-time, from 1997 to 2000, and then full time until February of 2002. I was then hired as an Aviation Meteorologist at Jeppesen Dataplan (a subsidiary of the Boeing Company) in February of 2002. Since then, I have really enjoyed working for the company in the field of 24/7 Operational Aviation Meteorology, and I was subsequently promoted to the level of Senior Aviation Meteorologist as of May of 2007. I am now going in my 7th year with Jeppesen.

One of the most difficult challenges (and there have been a few!) while working with Jeppesen occurred during my 2nd year with the company. We were asked to provide weather and forecast support for Polly Vacher of the “Wings around the World” flight for charity (on the web at www.worldwings.org.) Mrs. Vacher, or just Polly as we came to know her, flew a record-breaking around-the-world flight from May 6, 2003, until April 27, 2004. Polly become the first woman to fly solo over Antarctica in a single-engine Piper Dakota aircraft, and the first person to fly solo around the world, landing on all seven continents, for a total of 60,000 nautical miles, in a total time of 357 days. Needless to say, this presented an extreme forecasting challenge for the 12 meteorologists on staff (at the time) here at Jeppesen. Polly was attempting to fly a single engine aircraft at low altitudes, no higher than 18,000 feet, and with no de-icing equipment, around the world from Pole to Pole! We certainly had our work cut out for us in the Metplan department! Although she did not quite make it to the South Pole, she did fly from McMurdo Station to about half the distance to the South Pole before having to turn back due to a combination of very high winds and low fuel. All of us at Metplan were so proud to have been part of aviation history and more importantly, to help those among us who are less fortunate.

In 2006, I began to develop an interest in storm chasing. I have always been intrigued by severe weather - not just for the fascination of it all, but more so to use my knowledge about meteorology in order to help the general public and to possibly save lives. Needless to say, I just had to get out to the Great Plains in search of supercell tornadic thunderstorms, as these are among the most dangerous and deadly phenomena on Earth. My first Storm Chase occurred during the week of May 18-24 in 2007. I traveled with a group from www.tornadonerds.com. I saw my first supercell thunderstorm and first tornado near Hill City, Kansas on May 22 . It was awe-inspiring, scary, and educational all at the same time! What made my first chase even more special was that I was able to help to inform the public along the way, answering people’s questions about the storm’s motion and safety concerns while at stops along the way. Storm chasers are easy to spot, because they are the only ones with communications antennas atop of their vehicles, and laptops propped up inside their vehicles, who are not the Police or Emergency personal! For our chases, we used a chaser/analyst weather software suite (GRLevel3), that overlays radar, road networks, satellite imagery, storm motion vectors, and storm attributes including hail size, vertically integrated liquid (VIL) content, tornadic vortex signature (TVS), and storm relative velocity (SRV). I also become an “official” NWS storm spotter, #SC 130, in 2007.

I went on a second storm chase this past May of 2008, and I encountered at least 6 tornadoes of varying sizes while tracking high precipitation (HP) Supercell thunderstorms across NW Kansas. Again, and most importantly, I was able to do my small part in increasing public awareness of these dangerous storms along the way, and help to report them to the local NWS office once spotted.

To make a long story short, I surely have a newfound respect and appreciation for Mother Nature, as she is without a doubt, a force to be reckoned with, and not to be taken lightly. I would like to thank everyone at the SJSU Meteorology Department, past and present, as well as my fellow co-workers and friends in the field; all of you have made an indelible impact upon my life, on both a professional and personal level. 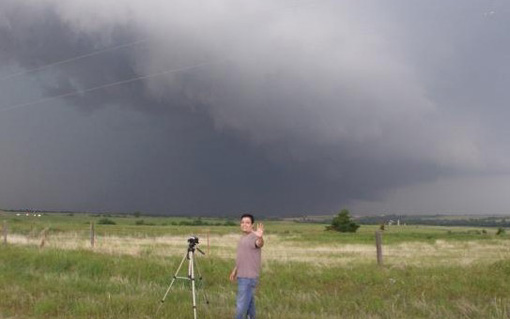