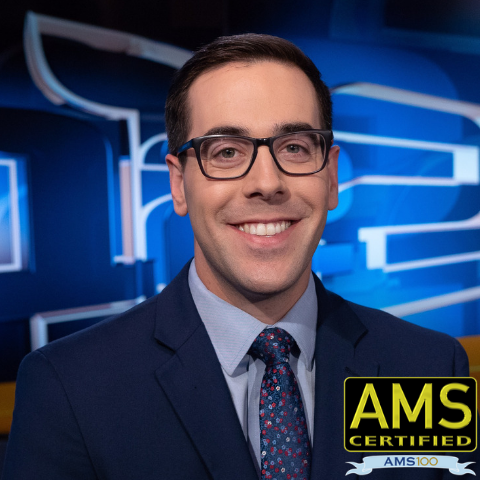 Hey everyone! My name is Jeff Forgeron, and I’m a broadcast meteorologist living in Portland, OR. My career has taken me through the Desert Southwest, Tornado Alley & now the Pacific Northwest. It's great to be back on the West Coast where I've spent the majority of my life.

I grew up in Palm Desert, CA located in SoCal’s Coachella Valley. I dealt with intense desert heat throughout my childhood, so it’s nice to be living in a cooler, wetter climate. My passion for weather stems back to the 2nd grade. This is a common theme with meteorologists; many of us loved weather as kids. During high school, I realized SJSU was one of the few spots on the West Coast that offered a B.S. in Meteorology. I'm so glad I chose SJSU. The small class sizes gave me ample time for 1 on 1's with my professors.
I graduated in Spring 2014, but started working as a writer for Weather Underground in 2013. While I was at Wunderground, I wrote 7 days per week for their website. Let's just say I've written my fair share of weather discussions. My career didn't really take off until about a year after graduation.

In early 2015, I made my television debut competing on the TBS reality show America’s Next Weatherman. Soon after, I landed my first broadcast meteorology job for one of the local news stations in my hometown of Palm Springs. In early 2017, I moved out to Waco, TX and joined the ABC affiliate as a broadcast meteorologist. After spending two years in Tornado Alley, my fiancé and I decided that we wanted to move closer to our families. I joined KPTV Fox 12 in Portland, OR in March 2019. I'm currently a morning meteorologist, featured on the award winning newscast Good Day Oregon.

Besides holding a B.S. in Meteorology from SJSU, I earned my CBM seal through the American Meteorological Society in 2018. In addition, I was appointed to the Board on Broadcast Meteorology for the AMS. I'll be serving on the board for 3 years starting in January 2020.