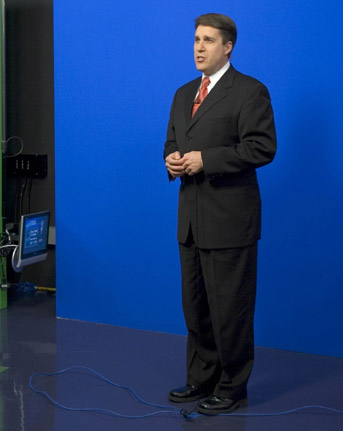 Growing up in Massachusetts, I was always tracking the weather - how much snow and rain we got etc. But when it came time to go to college, I thought I needed to be responsible and focus on something where I could earn a good living. So I pursued a business program in college and graduated from the University of Massachusetts with a concentration in Finance. It turns out that the business world and I were not a great fit, but at that point I wasn't exactly sure where I was headed.

Somehow, Law School sounded like the place for me. So I took the LSAT and was ready to start applying to school. At the same time, my wife wanted to move back to California, and I thought I could just as easily attend Law School here as anywhere else. But a funny thing happened on the drive across the country: really big thunderstorms! It became clear to my wife that this was something that really got my heart pounding. She kept asking me if I was sure that Law School would really “melt my butter”. Of course she was right: I loved weather! But I wasn’t sure how I could make a living at it.

After we had arrived in Santa Barbara, I started interning with the local TV weather guy. On my first day, Hurricane Hugo was slamming into South Carolina. At that point I said to myself, "If this guy is getting paid to do this, someone will pay me to do the same!" It wasn't that I was necessarily focused on the TV side of things (although that's where I find myself today), but rather that I realized that there were people happily earning a living doing the very thing that had captured my fancy since I was a child. I just had to figure out how to make this happen for myself.

My math background wasn't going to cut it in meteorology school, so back to night school I went - first at UCSB and then UCLA. I then started exploring schools with meteorology programs. My visit to SJSU was a turning point in this process. I found the professors to be welcoming, smart, professional, and respectful of me as an older student. So at 28 years old, I enrolled at SJSU.

Prior to my time at SJSU, I had received college credit from four other schools. This experience gave me some insight into what was good and not so good at different schools. It also helped me "set the bar" for my expectations at school. After a short time at SJSU, that bar moved way, way up. Within the first few months, I was working as a technician on a really cool research project at NASA. In class, I was learning from a great and diverse group of top-notch scientists and educators. It was thrilling!

Later in my first year, with the assistance of a professor, I started working part-time at the National Weather Service. From this experience I decided that I wanted to study stratus clouds and how they impact operations at Bay Area airports (especially at SFO). When the department chair got wind of this, he came to me with a pile of papers that he wanted me to read. He then offered to support my study financially, as well as give me access to the latest computers. It was clear to me then that SJSU-Meteorology valued its students, and really wanted them to succeed.

In my second year, I started working on a fascinating project with other SJSU meteorologists. The project ended up continuing for almost 10 years. In 2002, the group received the FAA's “Excellence in Aviation” Award, and the work on this project led to my master’s thesis. Although it took me longer than most to finish (I had a growing family and a developing career), I finally graduated eight years after I started.

I've been out of college a few years now, and my job title is Chief Meteorologist for the local NBC affiliate. This job has given me a great opportunity to see many different and interesting angles in life. As I reflect back on my SJSU experience, it's hard for me to imagine a more fertile ground for a meteorology student. The courses were interesting, demanding, and fair. The professors were not just great scientists, but great people. The opportunities to get involved with interesting projects were many. In the end, there are a lot of us SJSU-Meteorology alumni, like me, that are earning a living and having a ball doing it.