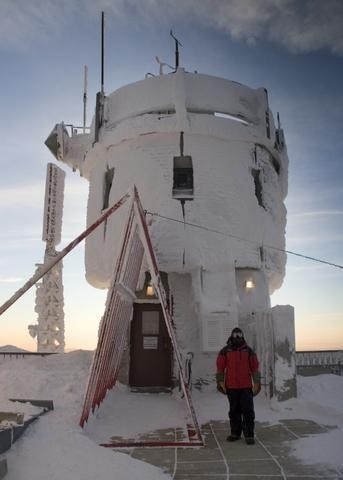 Growing up around Lake Tahoe, CA, weather was an integral part of my life - especially in the winter. At first, I merely watched the weather for skiing purposes, but as I neared high school graduation, a career test revealed meteorology as a possible degree. I started talking to my local National Weather Service office in Reno, NV, and a lot of them suggested the San Jose State Meteorology program either by experience or by reputation. I applied to SJSU as my first choice school and was accepted in fall of 1999. The education and forecasting experience I acquired during my five years there was challenging but fun, and provided me with the tools necessary to pursue a job in the meteorology field.

From January 2003 until January 2006, I worked at San Jose International Airport learning how to do weather observations. I was then accepted as an intern at Mount Washington, NH in December 2005, and in February 2006 I became a full-time meteorologist atop the northeast's highest point. Mount Washington is best known for the fastest recorded winds on earth, with the record at 231 mph. My job here has me forecasting and observing rime ice formation, cap clouds that I can reach up and touch, the insides of a thunderstorm, temperatures around -20 ° F or lower, winds of 100 mph+, wind chills near 100 ° F below zero, and stunning views up to 120 miles distant. It may be known as the "Home of the Worlds Worst Weather", but it is also the best way to apply and feel everything I learned from the meteorology program at SJSU.

Check the weather on Mt. Washington