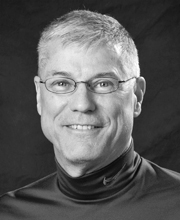 Professor Galen Lemmon is the Coordinator of the Percussion Program. He received both his Bachelor of Arts degree and his Master's degree in percussion performance from SJSU and has performed and taught in the Bay area for over 40 years. He was awarded a position in the San José Symphony when only 19 years old, and just three years later he was named Principal Percussionist.

Professor Lemmon records regularly at Skywalker Ranch in Marin County. Recordings include commercials, Universal Studio rides, and Disney movie soundtracks. He can be heard on the latest Simpsons' and Starcraft video games as well as the Star Wars 'The Force Unleashed' and 'Uncharted Drakes Fortune' video games. In August of 2011, he recorded Kinect Disneyland Adventures. In January 2008, he recorded the music for the movie 'In the Electric Mist.' More recently you can hear him in the movies '17 Again' and 'Ghosts of Girlfriend's Past.'

Professor Lemmon's prior teaching positions include San José City College and California State University, Stanislaus. He teaches privately in the South Bay and Fremont. Over the last three years, many of his high school and junior high students have been accepted to the CBDA State Honor Band and have held positions in the top bands. In 2011, half of all percussionists in junior high and high school bands and orchestras were his students. He is currently enjoying an amazing run with 20 out of 21 students selected for the Santa Clara County Honor Band from 2009 - 2011. The last two years his students have been first chair in the Alameda County Honor Bands as well. He is a past California Artist-in-Residence grant recipient, and is Director of the U Music Percussion Program.