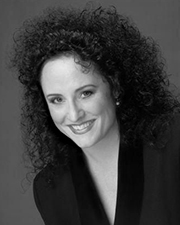 Enjoying her first year as a member of the Voice Faculty at San Jose State University, soprano Professor Julie Kierstine has garnered critical acclaim for both her “resplendent instrument” and for her vivid emotional portrayals of the Spinto soprano repertoire. Reviewing her Lincoln Center concert debut in the lead role of Maliella in “I Gioielli della Madonna” Anthony Tommasini in the New York Times noted Miss Kierstine’s “powerful, earthy soprano” in an “impressive performance”.

This many-faceted soprano also received rave reviews for her performances in the title role of Puccini’s “Manon Lescaut” with Hawaii Opera Theatre. “Manon’s role requires a strong lirico spinto soprano, one who can sing over the orchestra while carrying a dramatic tone. With nuanced expressiveness, volume control, a shimmering voice and a wonderful stage presence, she won the audience’s approval with no reservation.” (Honolulu Star Bulletin);   and in the role of Tosca:  “….a sizzling Tosca (who) clearly understands the Verismo vocal tradition, and has the technique to carry it off with aplomb.” (Palo Alto, CA).As Leonore in “Fidelio”:  “…Miss Kierstine who wowed CSO audiences previously, as Mimi and as Violetta, showed tremendous musical and dramatic range, (as the) brave and loyal Leonore…..the incomparable duet of rapturous joy being the climax of the opera.”  (Chattanooga Times Free Press).

Other credits include San Francisco Opera where she was rehearsal and performance Cover for famed soprano Karita Mattila, in the title role of Manon Lescaut, as well as performance Cover for Lady Macbeth (Verdi) and the title role of Tosca. Among other Puccini heroines Professor Kierstine has to her credit are the roles of Minnie in “La Fanciulla del West”, numerous other productions of “Tosca” as well as numerous performances of Mimi in “La Bohème”, and the title role of “Madama Butterfly”.  Additional roles include, Rosalinda (“Die Fledermaus”), Donna Anna (“Don Giovanni”) and Fiordiligi (“Cosi fan Tutte”).  In the Verdi repertoire she has been heard as Leonora (“IL Trovatore”), Violetta (“La Traviata”), and Amelia (“Un Ballo in Maschera”) -- “Soprano Julia Kierstine was a splendid Amelia.  She would reach for climactic notes fearlessly, rendering them truly and without shrillness – then drop to a sweet, beautifully controlled messa di voce.”  (Joshua Kosman, San Francisco Chronicle).

A distinguished advocate of contemporary repertoire, Professor Kierstine has appeared as Guest Soloist with the Cleveland Chamber Symphony, and at the Aspen, June in Buffalo and Grand Teton Music Festivals, performing the highly acclaimed cycle, “Canti Lunatici”, by Pulitzer Prize winning composer, Bernard Rands. In addition, she has appeared in numerous concert performances of Beethoven’s “Symphony No. 9” with orchestras from Pensacola to San Luis Obispo. She has also been a Guest Soloist with the Colorado Symphony in Handel’s “Messiah” and with the Buffalo Philharmonic, and the Santa Cruz Symphony performing Mozart’s “Great Mass in C”, with whom she also was heard as soloist in the Brahms “Requiem” and Mahler’s “Symphony No. 2”.  In the Verdi repertoire she has been Guest Artist with the Bozeman Symphony and Albany Pro-Musica in the Verdi “Requiem”, and in all-Verdi opera galas with the South Bend Symphony and the L’Orquesta Filarmonica de Lima. As First Place Winner of the Center for Contemporary Opera International Vocal Competition, Professor Kierstine made her New York Recital Debut at Weill Recital Hall (Carnegie Hall), in a program that included works by Craig Bohmler, Manuel De Falla and George Crumb (“Madrigals, Book I”). In addition to opera repertoire, she is an ardent advocate of song literature, and is a frequent recitalist, performing songs of composers as diverse as Ives and Crumb, to Bellini, Schubert and Sondheim.

In addition to her performing career, Professor Kierstine has been active as a private voice instructor and clinician for over twenty years and holds Bachelor’s and Master’s Degrees in Music and Vocal Performance respectively.  She received her Bachelor’s Degree in Music with Honors in Vocal Performance from the University of California, San Diego, where, in addition to vocal studies, she studied theory with Bernard Rands, Will Ogden and acclaimed percussionist Jean-Charles François. Professor Kierstine also holds a Master’s Degree in Vocal Performance from the New England Conservatory of Music, where she studied under renowned opera performance educator, John Moriarty.