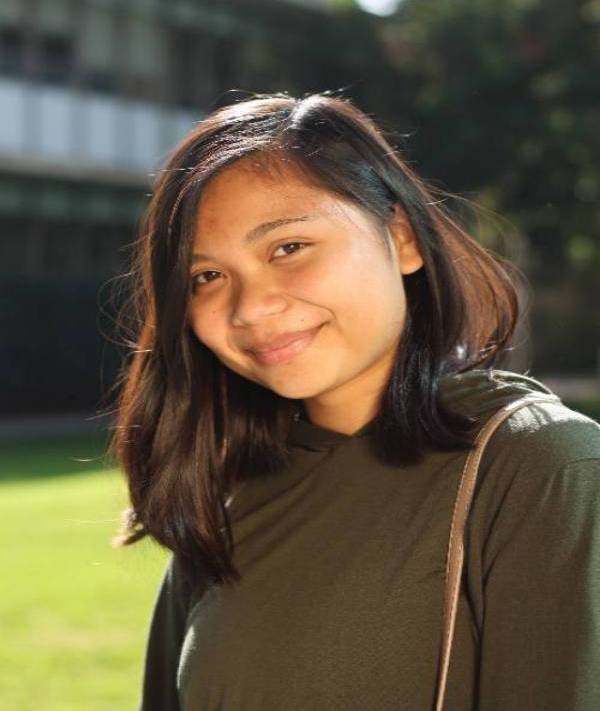 English
College of Humanities and the Arts

The main reason why I chose to major in English is because it was my strongest subject in high school, and also the one that I was the most interested in. Growing up, I was also an avid reader and writer, and so this also contributed to my interest in the major

My mom has definitely had the greatest impact on my life, because she is my biggest supporter. She supported my siblings and me all our lives and always encouraged us to do well in school while we were growing up. She’s also the main reason why I’m currently pursuing a college degree, since she always emphasizes the importance of having a bachelor’s degree. Neither one of my parents have graduated from college, so it’s important to both of them that their children do and obtain degrees.

I’ve only been attending SJSU since the Fall 2018 semester, so I’m relatively new here; however, I’ve had a few English professors so far that have already helped me grow as an English student. Dr. Brada-Williams and Dr. Baer were two of my professors last semester who helped me improve my reading skills and who also helped me to develop an even greater appreciation for literature. Dr. Brada-Williams introduced me to literary criticism, a subject that broadened my way of thinking about literature and how it relates to the world. Her workshops also provided valuable practice when it came to applying the various types of criticisms. Dr. Baer’s Shakespeare class also taught me to think differently about literature and its real world applications; before her class I was not a fan of Shakespeare at all, because it was so difficult for me to understand. After studying his works in Dr. Baer’s class, however, I learned to appreciate and interpret Shakespeare in a way that I hadn’t before. So, both Dr. Brada-Williams and Dr. Baer contributed greatly to my academic success last semester; I would also like to add that what they taught me last semester has also helped me in my analyses of the texts I’ve read for this current semester as well. Thank you Dr. Brada-Williams and Dr. Baer!

Before I started at SJSU I had been out of school for one academic school year; and, before this time, I had attended Sacramento State for one year, and Ohlone College for two years prior to that. Taking one year off from school was not something I planned at all; I was supposed to graduate from Sacramento State during Spring 2018, but it did not happen. During my time off from school I tried to keep busy with various internships, but I really missed being a student, and graduating from college was always in the back of my mind. By my own personal standards, I really saw myself as a failure for not graduating during the semester that I was originally intended to graduate during. Then, when I went to SJSU orientation during the summer of 2018, I was very discouraged to find out that I would not be able to graduate within two semesters as I had wanted to. So, even though I started the Fall 2018 semester feeling eager to be a student again, I still felt like I was behind because I wouldn’t be graduating anytime soon and like I wouldn’t be able to keep up with schoolwork after being away from college for longer than I ever had been. But, as the semester progressed, I was able to gradually get back into the swing of things and reignite my love for being an English major. I rediscovered my passion for my major, and I felt fulfilled as I continued to study literature; the semester went by very quickly for me because of this. While I am still eager and excited to graduate and to get my bachelor’s degree, I have found that being an English major at SJSU is very fulfilling for me and I can say that I’m glad to know that I’ll be graduating from this college in the near future.

I would say that a large part of my academic success at SJSU and at the previous colleges I’ve attended can be attributed to class attendance. For me, class lectures and discussions have really benefited me in my studies and also with helping me retain information when it comes to taking exams. Also, I would encourage students to put in the extra effort when it comes to schoolwork whenever possible because it’ll not only help ensure your academic success, but also help you grow as a student and person.

Even though I’ve been attending SJSU for two semesters now, this wasn’t my first time applying to this school. I’ve actually applied to SJSU five times prior to this last application where I finally chose to attend it. It’s a bit of a long story, but even though I applied to SJSU multiple times, and was accepted each time, I always ended up choosing a different school instead. I kept SJSU as an option every time, though, and now I’m finally attending this school! When I compare my experience at SJSU to the other colleges I’ve attended, I do feel my most fulfilled and like I’m at my best here.

"Natalie has written a thoughtful piece on the origins of her last name and people's responses to it that might be worth a look."

"Natalie is a great writer and an excellent student."