Khan presented his research, “Mutagenesis and Recombinant Expression of Aedes aegypti Serine Protease I (AaSPI),” at the system-wide event, which brought together hundreds of graduate and undergraduate students to showcase excellence in their innovative research and creative activities.

Khan was one of eight San José State University finalists who competed in the event on April 30 and May 1, which was hosted virtually by Cal Poly Pomona and for which the SJSU Office of Research was a sponsor.

With mentorship from Associate Professor of Biochemistry Alberto Rascón, Khan’s research observes the midgut digestive enzymes of the Aedes aegypti mosquito — an insect known for spreading potentially lethal diseases like Zika, Dengue fever, yellow fever and chikungunya — in hopes of providing a safe new approach to control their population. 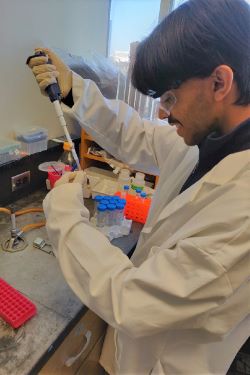 “Studying the Aedes aegypti mosquito is important locally and nationally because simulated models based on current climate data predict the expansion of mosquito populations in the near future,” Khan said in his research presentation.

Khan hopes his research can significantly impact mitigating a serious pathogenic threat, as rising temperatures due to global warming have created a novel habitat for mosquitoes to thrive — especially in the southern and coastal regions of the United States.

In Khan’s presentation, he states that one study estimates 390 million Dengue fever infections every year, while another found that 3.9 billion people worldwide are at risk of the disease. Current control strategies for mosquito larvae and adults include pesticides and biocides. According to Khan, although these treatments are effective, most of them can have devastating effects on the environment by destroying essential plant and animal life.

Khan was exposed to the lab through FIRES, the Freshmen Initiative: Research to Engage Students program sponsored by the W.M. Keck Foundation and led by a team of SJSU chemistry professors.

“I was in the first cohort, learning basic lab techniques, rotating through different labs, and in the end, joining the lab I am in now,” Khan said. “I continued the project on AaSPI started by a previous lab peer, focusing on trying to solubly express the protein. Many experiments later, we successfully expressed the protein but not to the purity we would like. Our next steps are to alter the protocol so we can have a highly concentrated and purified protein.”

Winning the CSU Research Competition was a challenging feat — Khan thanks his lab mates and Rascón for helping him through the research process.

“I want to thank Dr. Rascón for having faith in me and taking me in as a freshman who didn’t have any knowledge about the project or research being done,” Khan said. “I’m thankful he sets up an environment in the lab that allows for failure and allows every single student to grow — in our research and as a person. 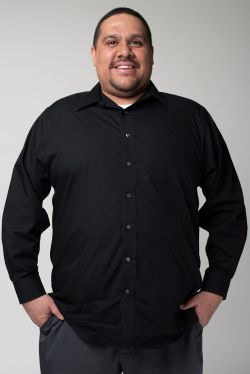 Rascón is optimistic about the progress of their research.

As a longtime medical enthusiast, Khan sees himself working towards his goal of being a physician.

“I like how medicine gives tangible results that are life-changing for many patients,” Khan said. “As a physician, I want to advocate for my patients by fighting for equity in health care.”

"We are very pleased to see Muhammad Khan winning a first place award at the 35th Annual CSU Student Research Competition. This is a great achievement and a testament to his capabilities and the sound guidance he received from his faculty mentor, Dr. Alberto Rascón, Jr. We hope that Muhammad will be encouraged by this recognition to embrace research as a way of thinking and doing throughout his career. At San José State University, we believe that, with a sound academic foundation, early engagement in research enables our students to develop analytical thinking skills and effective communication techniques that will set them apart as they kick off their professional careers. Congratulations, Muhammad!"

Division of Research and Innovation