2019 CoS Award of Distinction 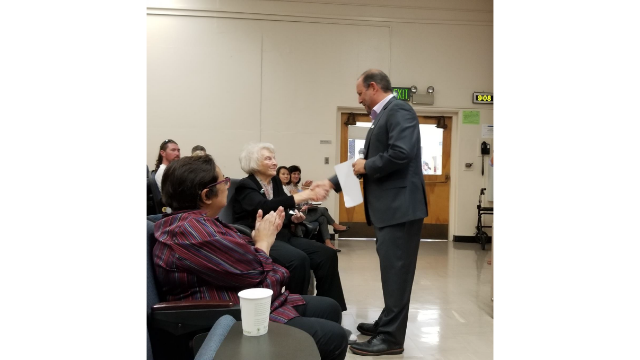 This award is given annually to an affiliate of the SJSU College of Science who has made significant contributions to the success of the College.

Ms. Mecklenburg’s professional accomplishments bring credit to the college, and she is a significant supporter of the college. She set up an endowment for student scholarships as well as making a department donation and a planned gift Beverly Mecklenburg has been a full time  employee and an officer of Haimson Research Corporation since 1972. A native of San Jose, California, she graduated form San Jose State College with a BS in Mathematics in 1958, and received an MS in Mathematics in 1971.  Her thesis was titled, "Mathematical Ideas Associated with the Search for a Deductive Electromagnetic Field Theory". She was employed at Ames Aeronautical Laboratories from 1956-1958 performing mathematical analyses of aeronautical research projects in the transonic regime. From 1958 to 1966 she was a member of the Mathematics Group at Varian Associates, performing mathematical analysis and associated computer programing for various R&D projects including superconducting magnet design, nuclear magnetic resonance research, electromagnetic dipole detection, RF field interactions in linear accelerators, and also providing computer programing consulting services. From 1966 to 1972 she was a staff member of the laboratory for Nuclear Science Massachusetts Institute of Technology, working on the 400MeV Linear accelerator design and development program performing mathematical analysis and associated computer programing. Her work since 1972 has been at Haimson Research Corporation, and projects have included electron gun design optimization, electron beam instability studies, design of microwave accelerator waveguides for electron linear accelerators, detailed analysis of bean breakup prevention, space charge and electron bunching optimization studies. She is the vice-president and chief financial officer of Haimson Research Corporation.