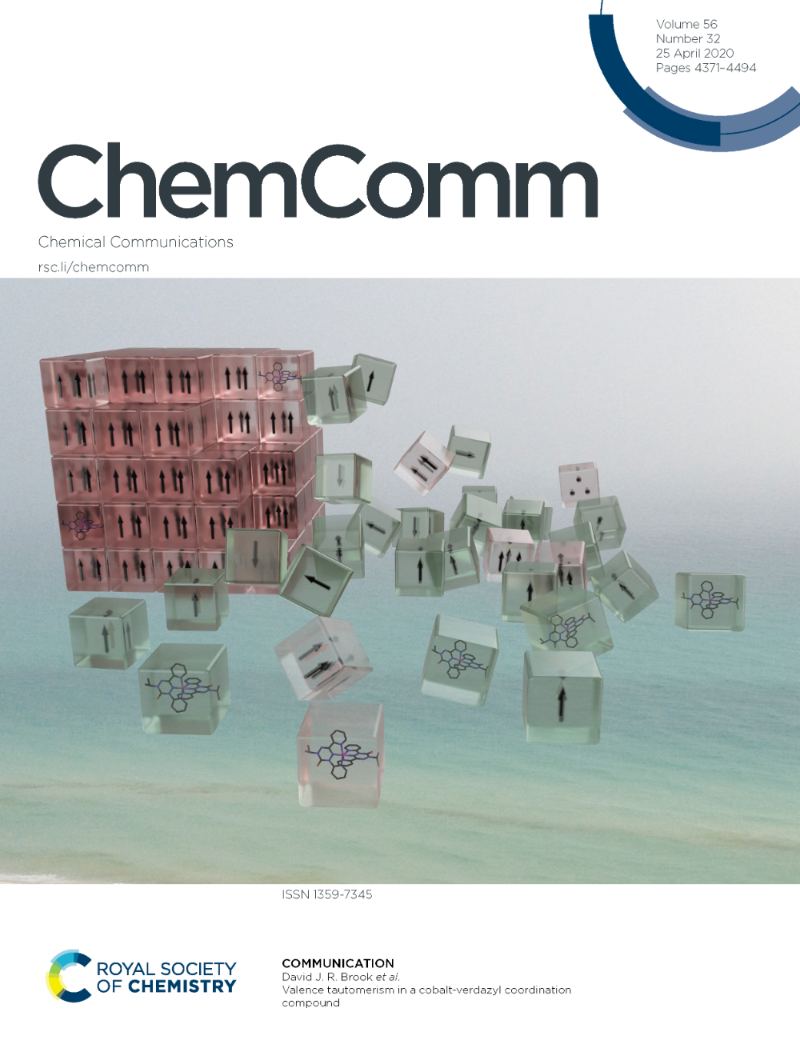 In a recent paper featured in the journal Chemical Communications, Professor David Brook of San Jose State University along with faculty at the University of Idaho and the National High Magnetic Field Lab, report a molecule that changes magnetic state when it dissolves in solvents.

In the crystalline form, the compound is red and each molecule has a large magnetic moment (shown as arrows in the depiction above). In solution the color changes to green and the magnetic moment is reduced. Molecules that can switch magnetic state as a result of external influence have potential application as sensors as well as in information storage at the molecular level. The next goal of the research is to identify the molecular interactions that maintain the more magnetic state of the molecule in the crystal lattice. More information can be found on Brook Research Group page.

Researchers at San Jose State University have quantified the impact of education on reducing individual carbon emissions. The recently published paper in PLOS ONE -- “The role of climate change education on individual lifetime carbon emissions” (Cordero, Centeno and Todd, 2020) -- demonstrates that students in California who received a high-quality climate change education went on to reduce their personal and household carbon emissions by an average of nearly 3 tons per year compared to the average Californian. The study reveals that if similar education programs were applied at scale, the potential reductions in carbon emissions would be of similar magnitude to other large-scale mitigation strategies, such as wide-scale adoption of rooftop solar or electric vehicles. 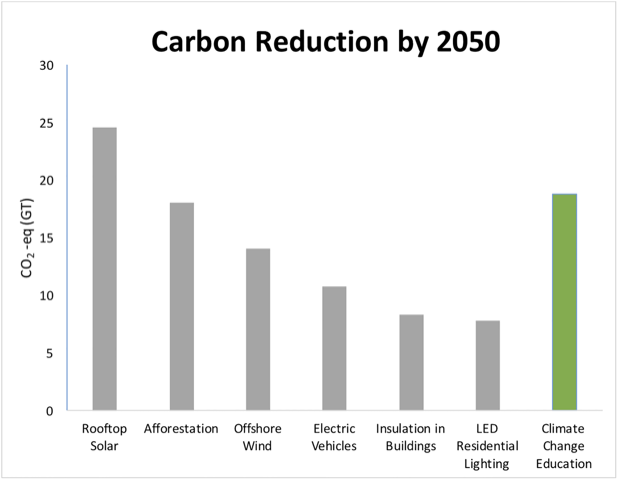 Fig 6. Comparison of various existing technologies that can be applied over a 30-year period (2020–2050) to help reduce global carbon emissions.

“This is the first time anyone has quantified the carbon-emission reduction impact of high-quality environmental education,” said lead author Eugene Cordero. “We hope that this research will encourage policymakers to recognize education as one of the most effective tools we have to achieve our carbon emission reduction goals.” 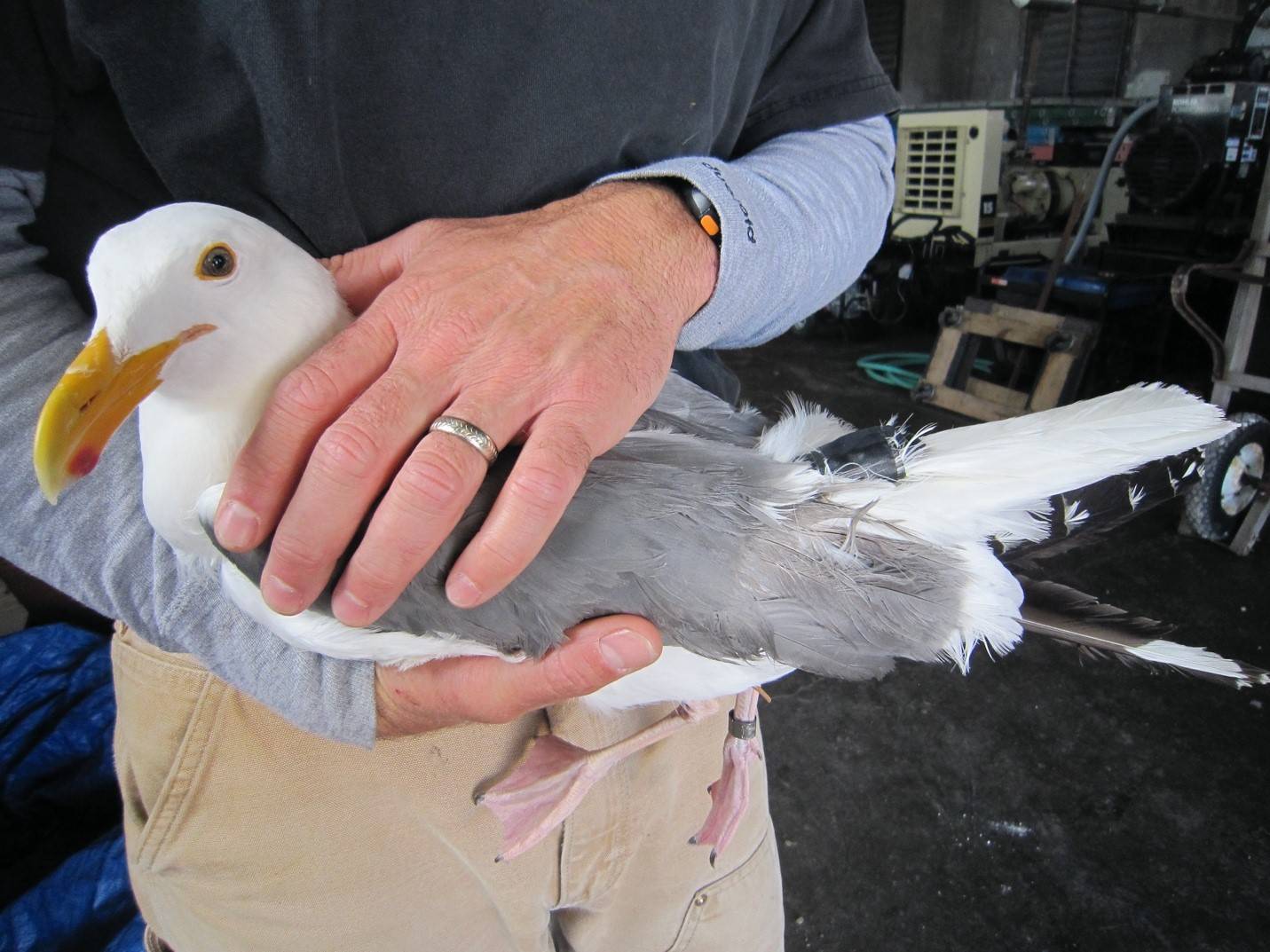 They say “you are what you eat” but we can also add “you are where you’ve been”, at least in the case of gulls.  A new study published in the journal Microbial Ecology and led by former SJSU student Sue Cockerham (MSc in Ecology & Evolution, F’18) characterized the microbiomes of western gulls from multiple breeding colonies along the west coast.  These large white and gray gulls feed in the ocean, but they are also known for feeding in large urban centers, landfills, and parks.  Wherever they feed, gulls are exposed to bacteria found on food, whether its fish and krill or tasty garbage like BBQ chicken, hotdogs, food wrappers, etc.

The project resulted from a collaboration between Dr. Scott Shaffer’s and Dr. Cleber Ouverney’s research groups in the Department of Biological Sciences at SJSU.  The team collected swabs from the mouth, feet, and cloaca of 75 gulls from seven breeding colonies in southern and northern California and Oregon.  Using a metagenomic approach, 16S rRNA from each swab was extracted and sequenced to determine the microbial diversity found on each gull.  Overall, the study identified 8,542 organismal taxonomic units (think different bacteria) and mean bacterial diversity per gull was associated with colony distance to the coastline.  The results suggest that proximity to locations where gulls forage is reflected in the bacteria found on their bodies.  A future goal of this work is to identify harmful bacteria that gulls are exposed to when they feed in landfills or garbage dumps.

The faculty from the SJSU Meteorology and Climate Science Department continue to be the “go-to” media expert commentators on matters including local weather phenomena, climate, and fire weather, with multiple TV and radio appearances in the last week alone. The media come to our faculty often because of their keen insights developed through cutting edge research.

A Galaxy without Dark Matter 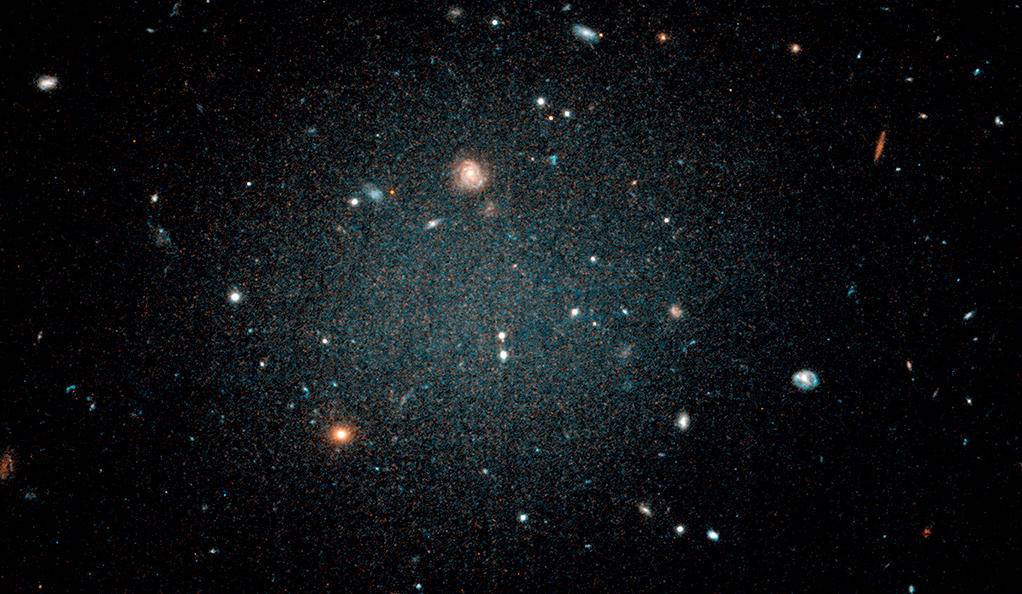 This image of NGC1052-DF2 was taken by the Advanced Camera for Surveys on the Hubble Space Telescope. (Photo credit: NASA, ESA, and P. van Dokkum [Yale University])

In a paper published in Nature last week, researchers from Yale, San Jose State University, University of Toronto, Harvard, and the Max Planck Institute for Astronomy revealed a startling discovery: they have found a faint galaxy that contains no dark matter. This discovery is startling and important because it establishes for the first time that “dark” matter, making up about 85% of the mass in the universe and so called because of its lack of interaction with light, is not necessarily present in every galaxy as previously thought. This demonstrates that dark matter is a substance that exists independently and is not merely an artefact of gravity in galaxies. The discovery further requires that new theories be developed for how to form galaxies without dark matter as a gravitational incubator.

SJSU Physics and Astronomy Professor Aaron Romanowsky, a co-author of the paper, and his colleagues were able to demonstrate the absence of dark matter in the galaxy, known as NGC1052-DF2, by analyzing the velocities of star clusters orbiting the galaxy from spectroscopic observations made at the W. M. Keck Observatory on Mauna Kea, Hawaii. From the velocity distribution they measured the mass in the galaxy and thereby ruled out the presence of significant amounts of dark matter.

Another account of this groundbreaking work can be found from the Hubble Space Telescope.

Khatami Honored for his Research in Condensed Matter Physics

Research from the lab of Physics and Astronomy Professor Ehsan Khatami and his team of research students has been receiving a lot of attention lately (including in our Oct. 3 post). A recently article by Khatami and SJSU students Kevin Ch’ng and Nick Vazquez titled “Unsupervised machine learning account of magnetic transitions in the Hubbard model” published in Physical Review E has been featured on Kaleidoscope. This honor follows the announcement in December that Khatami will be honored as one of two Early Career Investigator Award winners by the SJSU Research Foundation. In her announcement of the award, Associate Vice President Pamela Stacks wrote:

“The SJSU Research Foundation Early Career Investigator Awards recognize tenure-track SJSU faculty who have excelled in areas of research, scholarship or creative activity (RSCA) as evidenced by their success in securing funds for RSCA, publishing in peer-reviewed journals, and carrying out other important scholarly and creative activities at an early or beginning point in their careers at SJSU. One award goes to a faculty member in the College of Science or the College of Engineering, and another is made to a faculty member from the other colleges combined. Each winner receives a cash award of $1,000 to be used at their discretion.

In the three years since he joined the Physics & Astronomy faculty, Ehsan Khatami has made remarkable contributions to the computational infrastructure and capabilities in the department and college; published extensively in the highest-ranked science journals, including one paper in Nature and two in Science, with co-authors from institutions like MIT, Harvard, and Princeton; and served as research mentor for seven undergraduate and six graduate students.

Dr. Khatami was hired to help expand the department’s offerings in computational physics throughout the curriculum. The first project he undertook was to build the department’s first modern high-performance computational cluster, which is used extensively by students enrolled in big-data courses and undertaking computational research. Because of his computational expertise, Dr. Khatami joined Dr. Sen Chiao as Co-PI on the successful NSF Major Research Instrumentation proposal that funded the $900K supercomputer now installed at the Research Foundation. He also was awarded a three-year NSF Research at Undergraduate Institutions grant for his project on “Disorder in Strongly Correlated Systems.”

Dr. Khatami and his students have expanded their research focus to apply machine learning techniques to the solution of complex quantum problems, and one of his graduate students has been the lead author on two papers, one already published and highlighted in Physical Review X. This paper is just one of the 12 published and two submitted papers that Dr. Khatami and his collaborators have produced since he arrived at SJSU.

In addition, Dr. Khatami has been recognized by others outside the institution. In 2016, he was named one of only seven Kavli Institute for Theoretical Physics (KITP) Scholars. This three-year visiting position is awarded to faculty at teaching-intensive institutions who engage in ongoing research activity, and provides support for six weeks of travel to the KITP program at UC Santa Barbara. He has given several invited talks and has participated in national and international conferences, all of which spread the word about the outstanding research being done at San José State University.” 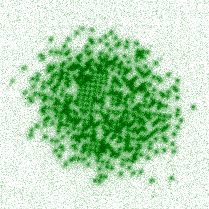 In a paper just published in the journal of Science, experimentalists at Princeton, led by Prof. Waseem Bakr, and several theorists including Prof. Ehsan Khatami of SJSU, report their direct observation of an exotic magnetic phase of matter with ultracold atoms that could help explain how high-temperature superconductivity — the complete loss of resistance to electric flow— works. By applying a strong magnetic field researchers find that atoms form a checkerboard pattern in the alignment of their intrinsic magnetic fields while slightly leaning away from each other, a state termed “canted antiferromagnetism”. Prof. Khatami used a state-of-the-art numerical technique to obtain numerical results for comparison to the experimental measurements based on a well-known theoretical model, which was crucial in guiding the experiments and allowing the team to characterize the new phase of atoms. The study is an important step towards better understanding electronic properties of solids, which can help us design better materials with specific properties we can harness in technology, energy and industry applications.

Study Reveals a New Trick in a Microscopic Arms Race

C. elegans, a nematode (roundworm) that lives in soil, feeds on bacteria that grow on decaying organic matter. But one genus of bacteria, Streptomyces, fights back against these nematode predators with chemical toxins known as nematicides. Indeed avermectin, a nematicide produced by Streptomyces avermitilis discovered in 1978, is such a valuable drug in the treatment of parasitic worms in humans, that its discoverers were awarded a Nobel Prize in Physiology or Medicine in 2015.

Now a new study, published in the journal eLife, reveals how nematodes escape when they enter into nematicide-containing soil: they sense dodecanoic acid, a tell-tale sign that the Streptomyces bacteria are nearby. The study, involving a multidisciplinary collaboration between SJSU and UCSF, has found that C. elegans detects the Streptomyces-produced dodecanoic acid trail via a specific chemosensory receptor expressed in sensory neurons in the head and tail, and hastens a retreat from the area before succumbing to the nematocides.

The scientific team making this discovery was an exemplar of multidisciplinary research including students and faculty researchers from six departments at two universities. The team was led by Profs. Miri VanHoven (Biological Sciences) and Laura Miller Conrad (Chemistry) and included Profs. Daryl Eggers (Chemistry), Martina Bremer (Mathematics and Statistics), and Sami Khuri (Computer Science) all from SJSU and Prof. Noelle L’Etoile (Cell and Tissue Biology)  and Dr. Colleen O’Loughlin (Bioengineering and Therapeutic Sciences) from UCSF.