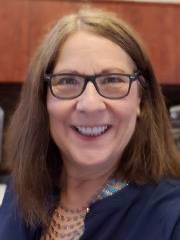 Debbie Mullin became the college’s Academic Resources Manager on October 30, 2018. Having successfully led teams in a number of industries, Debbie is familiar with staff development, organizational development, and financial support. She is particularly experienced in the areas of process improvement and change management.

Before joining the SJSU College of Social Sciences, Debbie was the Administrative Analyst in SJSU’s Department of English and Comparative Literature. She improved efficiency in that department by establishing a self-serve appointment system and reducing incoming phone calls by 90%. Debbie is fanatical about delighting customers. She is goal oriented, collaborative, transparent, and supportive.

Debbie grew up in New Jersey, and lives in the Alum Rock Park area of San Jose with her husband Doroteo, son Ryan, daughter-in-law Brittany, and 3-year-old grandson Noah. Her eldest son Darryl and his wife Elise live in Studio City, along with her grand dog, Larry. Debbie and Doroteo enjoy spending time with their sons and their families, and especially enjoy meeting Darryl and Elise in Paso Robles to do wine tasting. Debbie also loves working on genealogy projects and the family secrets waiting to be discovered.