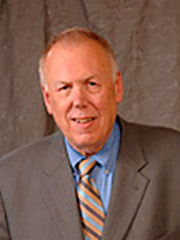 Leslie C. Francis is a native of San José and a graduate of San José State University. He received his BA in Social Science (1965) and Secondary Teaching Credential (1966). Les Francis began his career in 1967, when he became the youngest person ever to join the ranks of the professional staff of the California Teachers Association. During his time there, he also played an instrumental role in the national campaign to amend the U.S. Constitution to permit 18-year olds the right to vote, an effort that was spearheaded and funded by the National Education Association. Les Francis currently is with Goddard Claussen Strategic Advocacy, one of America's most successful public affairs and issue advocacy firms, where he serves as Executive Vice President in the company's Washington, D.C. office. Previously, Les served as Vice President for Communications & Public Affairs, for Educational Testing Service, the world's largest private educational research and assessment organization. Prior to joining ETS, he was Vice President of Winner & Associates and a partner in Winner/Wagner & Mandabach Campaigns. He has lived and worked in Washington, D.C., since January 1975, when he joined the staff of Congressman Norman Y. Mineta of San José, as chief of staff and principal political adviser. He served as deputy chief of staff in President Jimmy Carter's White House. His White House responsibilities included devising legislative strategies for presidential policy initiatives and coordinating the various Cabinet departments' congressional relations operations. Francis has served as a staff member, manager, or senior adviser in campaigns for almost every office from city council to president. He also served as executive director of the Democratic National Committee and the Democratic Congressional Campaign Committee. In 1981, Francis launched his own business, The FMR Group, which was a pioneer in the grassroots-lobbying field. He and his firm won national recognition from the Public Relations Society of America and the American Association of Political Consultants. Francis is a board member of several nonprofit organizations, including the Council for Excellence in Government, the Civic Mission of Schools Campaign, and the Committee for the Study of the American Electorate. He also serves as a volunteer consultant to the National Democratic Institute for International Affairs and has advised democratic movements and parties in Northern Ireland, the Czech Republic, Slovakia, Romania, Bolivia, Hong Kong, Taiwan, and Bosnia. Francis has authored and co-authored articles for such newspapers as The New York Times, The Washington Post, The Sacramento Bee, The Pittsburgh Post-Gazette, and the San Jose Mercury-News, among others. He spent eleven years as an adjunct instructor of Political Communications at the George Washington University, and has been a guest lecturer at several other universities.