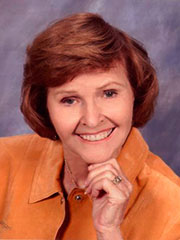 Susie Wilson has a superb record of community service as well as service to San José State University. She was County Supervisor for District 1 from 1979-1991, and served the Board three terms as Chair. From 1973-1978, she sat as a member of the San Jose City Council, and was Vice-Mayor from 1976-1978. Since 1999 she has been CEO of WKW Mechanical Contractors, Inc. and sole proprietor of a governmental consulting firm, Solutions by Wilson. In addition to these key governmental and professional positions, Susie has served as Chair of the Valley Transit District Board, and was the first woman to become President of the Association of Bay Area Governments. She was a founding member in 1974 of California Elected Women for Education and Research (CEWEAR), as well as past president and life member. In 1990, she became a member of the Valley Medical Center Foundation Board of Directors, and is presently serving as Chair. She is a founding and continuing member of the Board of Directors of Bridge Housing. Susie played an integral role in insuring that the 100-year history of the YWCA was written and published in 2005. She was chair of the YWCA Capital Campaign from 1990-1993. In turn, the YWCA named its 63 low-income, housing units the Susanne B. Wilson Residence. Susie has been an active volunteer for the YWCA for 45 years. In 1975, Susie team-taught (as a student) a summer workshop on Politics with Prof. Terry Christensen. She graduated with a Bachelor's Degree in Political Science in 1976. She became the first "Leader In Residence" in 1995, team-teaching with Prof. Betsy Carroll. Susie currently serves on the Alumni Steering Committee for the Political Science Department, has been a member of the Spartan Foundation since 1982, and was the Foundation's past president from 2004-2006. She has also lent regular support to the Don Edwards lecture series. In 1980-1991, she co-founded with President Gail Fullerton, the Walk for Women of Sparta, which raised over $1 million for women's athletic scholarships over ten years. Susie also received the prestigious Tower Award from the university for the 1995-96 academic year.