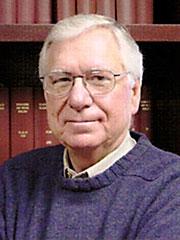 James L. McGaugh is a Research Professor and Founding Chair (1964) of the Department of Neurobiology and Behavior and a Fellow and Founding Director (1981) of the Center for the Neurobiology of Learning and Memory at the University of California, Irvine. He completed his undergraduate studies at San José State University and received his Ph.D. degree from Berkeley. He was on the faculty of the Department of Psychology at SJSU from 1957-1961. McGaugh's research investigates stress hormone influences on brain systems that modulate the consolidation of lasting memories. He has over 500 scientific publications, including over two dozen authored and edited books. His honors include election to the U.S. National Academy of Sciences and the American Academy of Arts and Sciences as well as election as a Foreign Member of the Brazilian Academy of Sciences and the Mexican Academy of Sciences. He was awarded the Laurea Honoris Causa from the University of L'Aquila in Italy. He is a William James Fellow and past president of the Association for Psychological Science and received the Distinguished Scientific Contribution Award from the American Psychological Association, the McGovern Award from the American Association for the Advancement of Science and the Norman Anderson Lifetime Achievement Award from the Society of Experimental Psychologists. At UC Irvine, McGaugh has received the Distinguished Faculty Lectureship Award, the Extraordinarius Award and the highest honor offered at UCI, the UC Irvine Medal. McGaugh Hall, on the UCI campus, is named in his honor. Dr. McGaugh has long had a keen interest in the success of SJSU. He endowed a scholarship for an SJSU Psychology student through the Western Psychological Association.