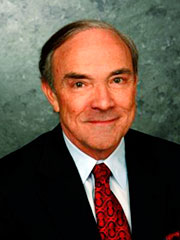 A. Robert Pisano '65 is president and chief operating officer of the Motion Picture Association of America and was previously national executive director and chief executive officer of the Screen Actors Guild. Prior to this, he was vice chairman of Metro-Goldwyn-Mayer (MGM). Before joining MGM he served as executive vice president and general counsel of Paramount Pictures and was a partner in the Los Angeles-based law firm of O'Melveny & Myers. He is a member of the Council on Foreign Relations, the Pacific Council on International Policy and the Entertainment Council, and he serves on the boards of several other organizations. Bob received his B.A. in Public Administration from San Jose State and a law degree from University of California, Berkeley. While at San Jose State, he served as president of the Associated Students and was a member of Theta Chi fraternity. In February 2009, Bob returned to campus to talk to students as part of the Alumni Association's Alumni Legends Speaker Series.