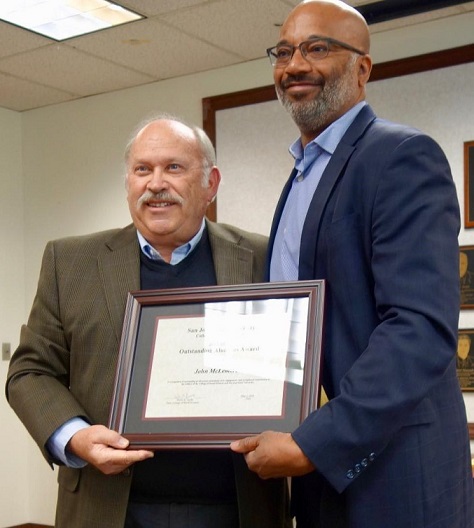 Mr. McLemore earned his Bachelor’s and Master’s degrees in Political Science from SJSU. After graduating, Mr. McLemore
worked for 38 years in the electronics industry. In addition, he served as a City of Santa Clara council member and on numerous committees and local boards. He has contributed significantly to SJSU and COSS committees over the years. He is a long-time supporter of the SJSU Alumni Association and co-founded the Political Science Alumni Association. The PSAA established an Alumni Scholarship that has raised tens of thousands of dollars and supports more than 20 students to date. Most recently, he established the annual John L. McLemore Scholarship to help support a student majoring in Political Science.

Mr. Lin received an MA in Applied Anthropology from SJSU in
2012. Since then he has achieved an extraordinary level of achievement within the American Red Cross. He works tirelessly to help people with urgent needs, particularly disaster victims. Much of Mr. Lin’s recent work has been “behind the scenes,” by helping to launch immediate financial assistance programs for flood and hurricane victims. His current efforts are focused on community mobilization and policy development. He is based at the American Red Cross’s headquarters in Washington, D.C.