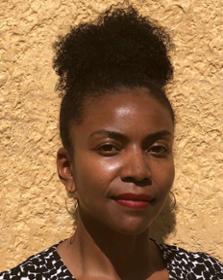 More than once, Jalylah Burrell has described her academic field to a seatmate on an airplane and been met with snorts of derision.

“They’ll start laughing — and not in a good way,” says the new assistant professor in the Department of African American Studies. “It’s like, why is that a thing to study?”

Burrell, a native of Seattle who went away to Spelman College in Atlanta as an undergraduate, earning a B.A. in English, is a scholar of Black literature, music and popular culture, concentrating on Black women and humor and hip-hop culture.

“I think people are uncomfortable with laughter and anything that is seen as light or funny, and so there’s this idea that it can’t be a topic of rigorous reckoning,” says Burrell. “In all of my classes one of the things I say to students is that joy is a human right. The idea that joy is contrasted with rigor is one I want to interrogate.”

Burrell is at work on two books — “Capacity for Laughter: Black Women and the American Comedic Tradition,” and “Wrong Ways: The Radical Aesthetics of Hip-Hop.”

Burrell can trace her interest in race, gender and comedy to middle school, when she heard her father laughing out loud while reading “White Boy Shuffle,” Paul Beatty’s coming-of-age novel about a young Black surfer. “It’s hilarious, incredibly funny, incredibly smart. After reading it I thought, ‘I’d like to read something like this by a Black woman,’” she says. ‘And I had trouble finding it.”

After completing her Ph.D., she completed two post-doctoral fellowships — at Rice and DePaul universities — before joining SJSU.