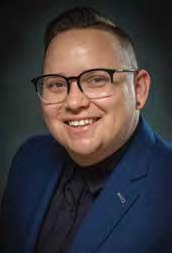 Jack Caraves, a new assistant professor in the Women, Gender,
and Sexuality Studies Program in the Department of Sociology and Interdisciplinary Social Sciences, feels at home at San José State.

The child of parents who migrated from Mexico, Caraves was among the first in the family to graduate from high school and attend college, earning a bachelor’s degree in Latin American and Latino Studies from UC Santa Cruz and a master’s degree and Ph.D. in Chicana and Chicano Studies from UCLA. “I can relate to many of the students in terms of being low-income, first generation,” Caraves says. “They’re the types of students that I want to engage with and empower and learn with every day.”

Another aspect of Caraves’ research looks at how gender policing—the way family and institutions communicate and enforce binary gender roles. Caraves, who identifies as trans and nonbinary, hopes to add an understanding of the unique experiences of marginalized minorities to the transgender studies discipline “When we think about queer studies or we think about gender studies, often racialized minoritized communities are nonexistent in the literature,” Caraves says. “So while there’s a growth in Trans Studies, there’s not a discussion of what it means to be a Trans Latino or a migrant. My work becomes really important because it’s shedding light on this community that very much exists and is highly vulnerable to abuses and is often dehumanized in egregious ways.”