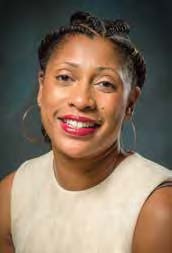 Her appointment as associate professor in the Department of African American Studies at San José State is the first time she has taught in a department outside of sports and exercise, but not the first time she has shared her work in the interdisciplinary field — and she thinks it is a perfect fit. “I say I do ‘me-search,’ Carter-Francique says. “My doctoral degree is in Sports Studies, but I also had a strong emphasis of African American studies, desiring to understand myself within the African American diaspora experience.” As a kid with asthma growing up in Topeka, Kan., she was encouraged to run in order to learn how to control her breathing. Her older brother was a member of a traveling track club and it didn’t take long for her parents to think of a way to keep younger sister occupied at meets. “They said, ‘We may as well put her in something,’” Carter-Francique says. She started running competitively at age 5. Her efforts eventually allowed her to attend the University of Houston, where she earned undergraduate degrees in kinesiology-exercise science and psychology, and competed on the track and field team, specializing in the 100-meter hurdles and the long jump.

Carter-Francique is also serving as the executive director of SJSU’s Institute for the Study of Sport, Society, and Social Change (see cover story). She will teach her first course in the spring semester — “The Triumph & Tragedy of Black Athletes in U.S. History.”