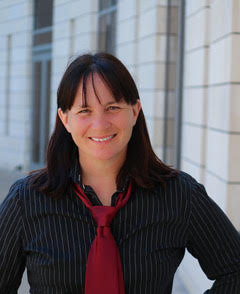 My research focuses on the history of women and children during the Progressive Era. I recently published a book, Her Own Hero: The Origins of the Women’s Self-Defense Movement, that explores the emergence of a women's self-defense movement paralleling the women’s suffrage movement in the early twentieth century. Feminists of this era sought to raise awareness about the sexual harassment and violence that women faced on the street, at work, and in the home. Advocates of self-defense insisted that all women should learn boxing or jiu-jitsu not only to protect themselves physically but to empower themselves psychologically for the political battles that lay ahead. Women expressed a newfound sense of empowerment through their physical training in self-defense that helped them resist harassment, assault, sexism, and disfranchisement. Self-defense figuratively and literally challenged the power structure that prevented women from exercising their full rights as citizens and human beings.

Presently, I am working on a project that examines the lives of queer suffragists in preparation for the 2020 centennial of the ratification of the 19th Amendment. The traditional narrative of suffrage history sanitized the private lives and public personas of individual suffragists contributing to the historical erasure of the lives and loves of prominent queer suffragists. Yet, it was through these intimate partnerships that women forged powerful personal alliances, often across national and transnational boundaries that proved essential to propelling the suffrage movement forward. This research considers the stories of several lesser-known queer suffragists who dedicated their lives to furthering the suffrage cause even as they deflected criticism about their personal relationships and gender non-conformity.