Pigasus, the flying pig, was used by John Steinbeck throughout his life as a symbol of himself, "earthbound but aspiring."

The Pigasus symbol came from my husband’s fertile, joyful, and often wild imagination.  After his signature on letters or inside his books, he would draw a fat little pig with wings, and lettered his name, “Pigasus.”  John would never have been so vain or presumptuous as to use the winged horse as his symbol; the little pig said that man must try to attain the heavens even though his equipment be meager. Man must aspire though he be earth-bound.

At some point, he began to write “Pigasus” in Greek letters, and he added the motto, “Ad Astra Per Alia Porci,” “to the stars on the wings of a pig.”

Once in the ‘50s when we were living in Florence, we became friends with a Florentine nobleman and his family.  Count Fossi was a delightful old gentleman, a student of the Arts, and his avocation was drawing.  He proposed to John that he should draw a proper Pigasus, and he asked, “Should I draw it in the style of Michaelangelo or Rafaello?” John chose the latter. And her is the result.

Elaine Steinbeck, who inherited the stamp 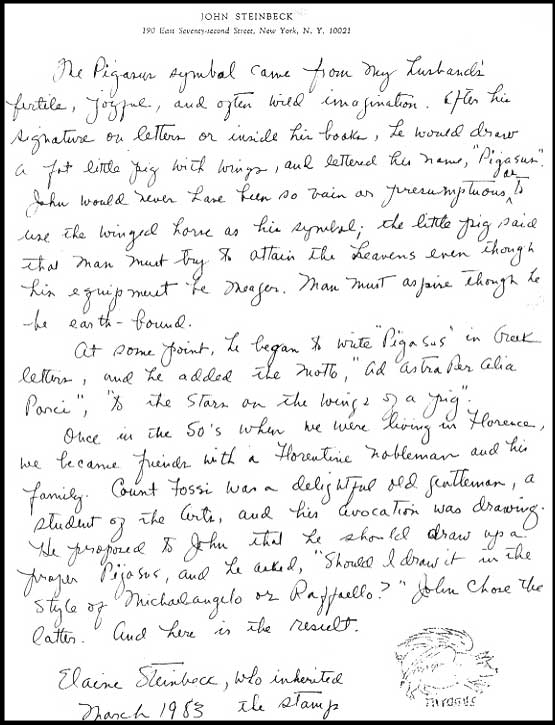