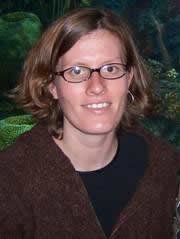 Katharine A. Rodger came to California from Massachusetts as an undergraduate. She completed her BA at University of California at San Diego. She entered the MA program in English at SJSU and worked throughout her time there as a graduate assistant at the Center for Steinbeck Studies. Her MA thesis was published in 2002 as Renaissance Man of Cannery Row: The Life and Letters of Edward F. Ricketts. As a Steinbeck Fellow, Katie began research on what would become her second book, a collection of Ricketts's essays, published in 2006 as Breaking Through. She received her PhD from University of California at Davis in June 2010.