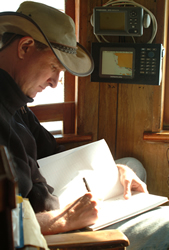 Jon Christensen is an adjunct assistant professor and Pritzker fellow in the Institute of the Environment and Sustainability and the Department of History at the University of California, Los Angeles. Jon was executive director of the Bill Lane Center for the American West, an interdisciplinary center for research, teaching, new media and journalism at Stanford University before moving to UCLA. Jon has been an environmental journalist and science writer for 30 years.  His work has appeared in The New York Times, Nature, High Country News, and many other newspapers, magazines, journals, and radio and television shows. Jon was a Knight Journalism Fellow at Stanford in 2002-2003 and a Steinbeck Fellow at San Jose State University in 2003-2004, before returning to Stanford to work on a Ph.D. in History. He is finishing a book entitled “Critical Habitat: A History of Thinking with Things in Nature,” and is currently organizing a large collaborative project to crowd-source a new, public environmental history of the Bay Area with libraries, museums, archives, nonprofit organizations, scholars, researchers, the media, and the public during the Year of Bay in 2013.  Write to him at: jonchristensen@ioes.ucla.edu