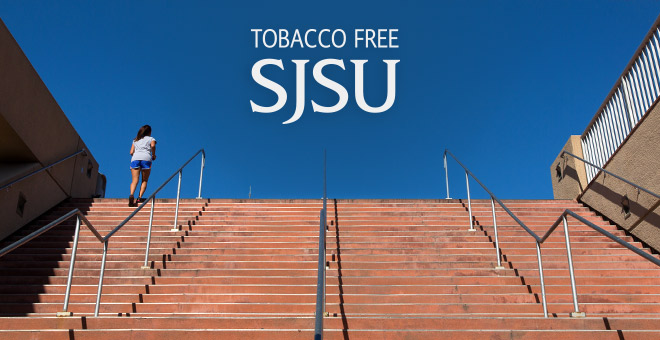 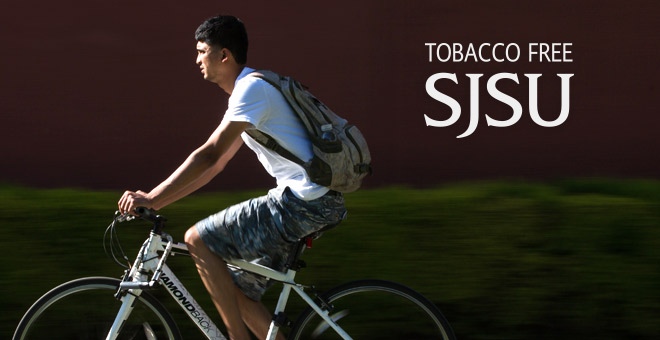 Beginning August 1, 2015, San Jose State will be a completely tobacco-free campus. Tobacco products, such as cigarettes, hookah, chewing tobacco, smokeless tobacco, vape pens and e-cigarettes, will not be permitted in or outside any buildings, including the Event Center and those on South Campus, or in parking areas. Read the tobacco-free policy.

Tobacco-free campus policies protect the health and safety of SJSU's students, faculty, staff and visitors by eliminating secondhand smoke on campus. Everyone will breathe easier, and this will ensure equal access for individuals most vulnerable to the effects of secondhand smoke exposure, such as those with asthma and allergies. Additionally, by adopting a 100 percent tobacco-free policy, SJSU will:

Tobacco is the leading cause of preventable and premature death, accounting for an estimated 443,000 American deaths in the United States each year, or one out of every five deaths. In order to counter the negative effects of tobacco on the college population, the American College Health Association (ACHA) has recommended that all colleges and universities adopt a 100 percent tobacco-free campus policy. Read more about smoke- and tobacco-free trends.