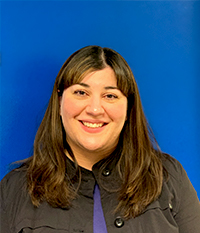 Michelle Hager is the Writing Center Director, and she taught college-level writing courses for 12 years. She earned her B.A. and M.A. in English and Certificate in Professional and Technical Writing from San Jose State University.

Prior to becoming the Writing Center Director in July 2013, she served for four years as the Writing Center Associate Director. In this position, she developed the web presence of the Center and created and supervised a program for lower-division writing tutors. She has also worked with the Writing Across the Curriculum Director, Dr. Tom Moriarty, to develop and supervise the new course-embedded writing tutors program at SJSU (which is now housed in the Writing Center). She has presented at national and regional conferences, including the Conference on College Composition and Communication (CCCC), the Northern California Writing Centers Association Conference (NCWCA), the Young Rhetoricians' Conference (YRC), and the Asian Pacific Americans in Higher Education Conference (APAHE). She is currently conducting multiple research projects related to writing centers.

Michelle taught English 1A and 1B (First Year Writing), English 22 (Science Fiction and Fantasy Literature), English 103 (Modern English Grammar), English 106 (Editing for Writers), English 112A (Children's Literature), and English 112B (Young Adult Literature). She sits on multiple university-level committees, and she was also the program chair for the 2019 Northern California Writing Centers Association Conference, which was hosted at SJSU. She belongs to the National Council for Teachers of English and the International Writing Centers Association.

Maria Judnick is a proud second-generation SJSU Spartan! While her father earned his M.A. in Educational Counseling from San Jose State University, Maria earned an M.A. in English and Comparative Literature from SJSU and a M.F.A. in Creative Nonfiction from St. Mary’s College of California. She completed her B.A. (English major with minors in Art History and Theology) at Loyola Marymount University.

For five summers, Maria has been honored to serve as the Project Coordinator for a National Endowment for the Humanities Institute for teachers ("John Steinbeck, the Voice of a Region, a Voice for America" in 2009, 2011, and 2013 and "The California Immigrant Experience in Literature and Theatre" in 2014 and 2016) directed by SJSU professors.

Since 2013, Maria has taught English 1A, English 100A, and Stretch English at San Jose State University. She is also a full-time lecturer at Santa Clara University where she teaches a wide variety of themed freshmen courses including those focusing on Sustainability and California literature, in particular. She has also taught Advanced Nonfiction Writing, Engineering Communications, and a course in the Environmental Studies department. In her spare time, Maria Judnick is a freelance writer and is working on her first young adult novel.

Amy Russo is the Coordinator for Multilingual Writing Support Services at the SJSU Writing Center working with both undergraduate and graduate students. She earned her B.A. in European Studies from Hendrix College and her Master of Library and Information Science from Louisiana State University. In December 2017, Amy earned her M.A. in Teaching English to Speakers of Other Languages (TESOL) from the Middlebury Institute of International Studies (MIIS) at Monterey.

Prior to joining the SJSU writing team, Amy taught English for five years in Japan and tutored for two years at a graduate writing center. Over the last seven years, she has made numerous presentations at conferences about linguistics, language teaching, and writing, including the California TESOL Conference, the UC Davis Language Symposium, and the JET Skill Development Conference for English Teachers. Amy is actively involved in Toastmasters, a public speaking non-profit. In addition, she partners with the San Francisco Japanese Consulate to support the Japanese Exchange and Teaching (JET) Program through teacher training. Amy is the co-founder and former officer of the JET Alumni Association of Monterey Bay (JETAAMB).

In this position, Amy creates workshops and trainings for tutors about working with multilingual students (with Michelle Hager, Writing Center Director). She also builds materials and professional development opportunities on topics relating to the support multilingual writers (with Dr. Tom Moriarty, Writing Across the Curriculum Director). Amy’s aim is to promote lifelong learning that is positive, flexible, and meaningful for students through careful content creation, learner strategy training, and collaboration with students, tutors, faculty, staff, and campus organizations.

Lakmini Campbell is the Writing Center Coordinator, and she joined the service in May 2019. She has a Bachelor's degree in Business Administration, professional recruitment and Project Management accreditation, and over 14 years of senior administrative higher education experience--all from London, United Kingdom.

Prior to moving to the US, Lakmini managed the Student Affairs employment service at a London university, which provided undergraduates and graduates with paid job opportunities to work within the institution. She was also the Careers Coordinator, focusing on introducing and coaching international students on UK recruitment practices. Within the School of Business, Lakmini championed building sustainable partnerships with recruiters through faculty liaison and other forms of shared services collaboration.

Her on-going commitment is toward student engagement that is built around respect, empathy, diversity, and inclusion.