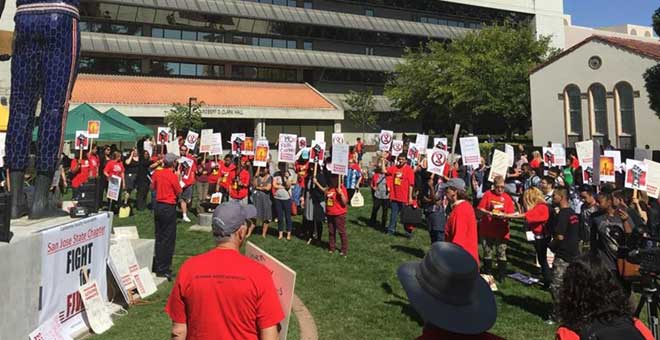 RESOLUTION condemning all acts of police brutality, racial profiling, and the use of excessive and militarized force throughout the country and in the California State University System.

Whereas, Ruth Wilson Gilmore has defined racism as “the state-sanctioned and/or extralegal
production and exploitation of group-differentiated vulnerability to premature death” (2007);

Whereas, police brutality and the use of excessive and militarized force are among the most serious ongoing human rights and civil liberties violations in the United States and have led to community destabilization, a decrease in public safety, and the exacerbation of structural inequities;

Whereas, Black and Latinx students as well as faculty, counselors, coaches and librarians at CSU campuses have been vulnerable to threats, racial profiling, excessive force and challenges to their professional standing;

Whereas, policing in the United States, and its systemic targeting of and use of deadly and brutal force against people of color, particularly Black people, stems from the ongoing legacy of slavery, lynching, Jim Crow laws, and the War on Drugs in the USA and has been perpetuated by violent and harmful law enforcement practices;

Whereas, contemporary police practices that employ policing for low level offenses or so called ‘‘broken windows’’ policing, as well as expanded and excessively militarized policing, have led to mass criminalization, heightened violence, and mass incarceration that disproportionately impacts Black and Brown people;

Whereas, data shows there is a direct correlation between the increased militarization of a police department and corresponding levels of police brutality;

Whereas, police use of force is among the leading causes of death for young men of color;

Whereas, Black people, including Black women and girls; Indigenous Peoples; and Latinos are killed by police at disproportionately higher rates than their white peers;

Whereas, people with disabilities and other historically marginalized communities, including LGBTQ+ individuals, immigrants, and those experiencing homelessness are significantly more likely to be criminalized and targets of police violence;

Whereas, police brutality and the use of excessive force have robbed countless communities of precious lives, have inflicted intergenerational harm and trauma to families, and are intensifying our nation’s mental health crisis;

Whereas, police in the United States, through acts of brutality and the use of excessive force, kill far more people than police in other comparable nations and historically have been shielded from accountability;

Whereas, this body finds that the conduct of police officers who engage in racial profiling and excessive force, which can include shootings, brutal beatings, fatal chokings, and any other
the state-sanctioned and/or extralegal
production and exploitation of group-differentiated vulnerability to premature death

excessive treatment physically and psychologically harms students and faculty of color in the CSU system;

Be it Resolved That the San José State Executive Board of the California Faculty Association:

(1) condemns all acts of brutality, racial profiling, and the use of excessive force by law enforcement officers and calls for the end of militarized policing practices;

(2) supports strengthening efforts to eliminate instances of excessive use of police force, and any efforts to conduct stringent oversight and independent investigations into instances of police brutality, racial profiling, and excessive use of force, and hold individual law enforcement officers and police departments accountable, including—calling on appropriate local agencies to investigate individual instances of police brutality, violence, and racial profiling, and police departments that violate civil rights;

(3) calls for the adoption of sound and unbiased law enforcement policies at all levels of government that reduce the disparate impact of police brutality and use of force on Black and Brown people and other historically marginalized communities; and

(4) calls on California State University leadership to prioritize the demilitarization of its campus police and security; increasing financial and institutional long-term investment in mental health counselors, mental health crisis intervention teams, and Black student and faculty resource centers; and mandating training in de-escalation and in unconscious bias for all campus police and security.