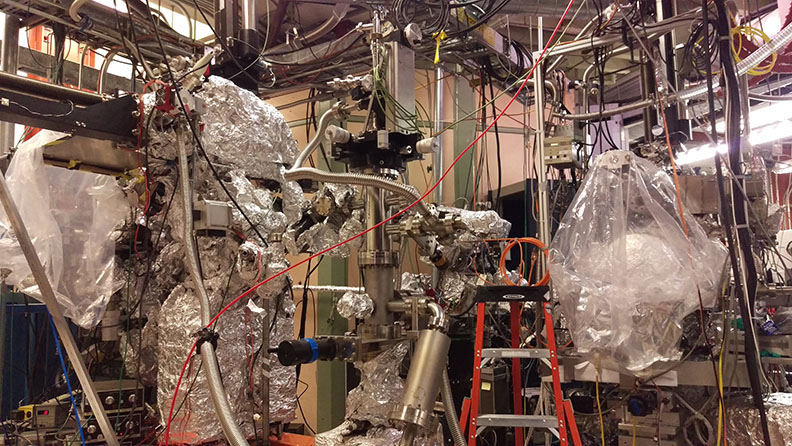 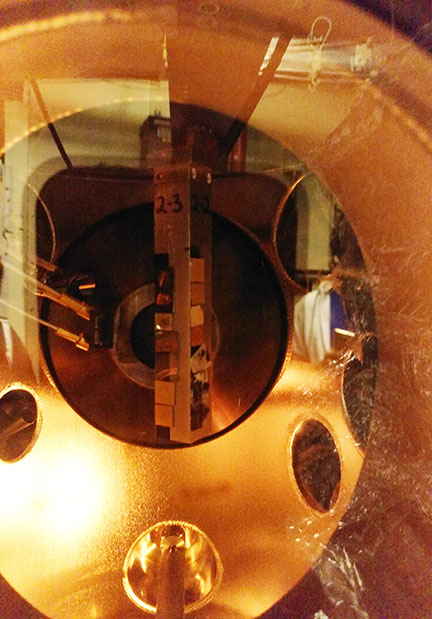 Above is an image of the analysis chamber at beamline 8-2 at SSRL. The chamber is maintained at a nominal base pressure of 5*10-10 torr. Ultrahigh vacuum conditions are needed due to the surface senistive techniques performed at 8-2, including X-ray absorption spectroscopy and X-ray photoemission spectroscopy.

The Wolcott laboratory focuses on the surface of bulk and nanoscale materials and their modification at the molecular scale. There are two main research thrusts within the group, the bio-thrust and energy-thrust with a unifying theme of understanding how surfaces (chemical, electronic, adsorbates) affect the properties of materials. In order to do this we focus on a host of techniques that guide our understanding of surfaces that includes FTIR, Raman spectroscopy, electrochemistry, X-ray absorption spectroscopy (XAS) and X-ray photoelectron spectroscopy (XPS). Both XPS and XAS experiments are carried out using synchrotron radiation and are unique assests in the Bay Area. Stanford Synchrotron Radiation Lightsource (SSRL) is a Department of Energy facility and constitutes one of the world's premier sites for both synchrotron and linear accelerator based work. More information about SSRL and SLAC cab be found here:

The nitrogen vacancy center is one of hundreds of color centers within diamond that are caused by impurities within the diamond lattice. The NV center is unique in that it has multiple oxidation states with specific spectral properties and that the reduced NV center charge state has a ground-state triplet that allows for optically detected magentic resonance (ODMR). ODMR is powerful in that it can directly measure the magnetic moments of nuclei or electrons that interact with the NV center electron. It is similar to doing NMR spectroscopy (Nuclear magnetic resonance) without the need for a superconducting magnetic and the technical hurdles that are required to perform NMR (helium and liquid nitrogen). In teh future we may see NMR spectrometers based on NV diamond commercially available and will be used on standard optical microscopes. A pulse sequence using visible light can be applied to the NV center to read-out the spin and record a T1 or T2 time and can be seen below in a hanh echo sequence example. 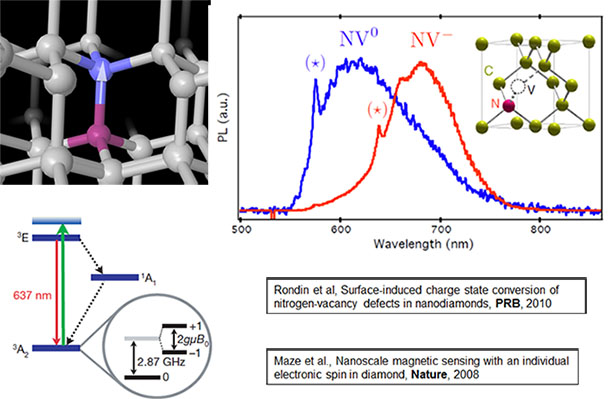 The Wolcott lab also focuses on the surface properties of semiconductors for photon harvesting in photoelectrochemical (PEC) and photovoltaic (PV) cells. PEC Cells can convert the inherent reductive or oxidative potential of either an electron or hole to do some chemical work. A classic example is the splitting of water (photolysis) to form hydorhen gas (H2) or oxygen (O2) with H2O as a fuel source. Because the electrochemistry must take place at the electrolyte-semiconductor interface, surface chemistry places a major role in the mechanisms and efficiency of PEC water splitting reactions. Much effort has been directed toward reduction of CO2 towards fuels such as CH4 and other precursors for industrial chemistry. The Joint Center for Artificial Photosynthesis (JCAP) is a partnerhsip between researchers at Caltech and Lawrence Berkeley National Laboratory and its focus is on solar fuels and their technological breakthrough into the marketplace. Additional information about JCAP can be found here: JCAP 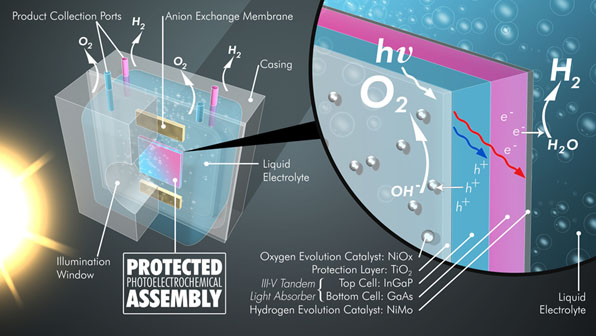