Lilly Pinedo Gangai is the inaugural Program Director of the Chicanx/Latinx Student Success Center. She leads, coordinates, and implements culturally sustaining academic programs and initiatives that support and promote Chicanx/Latinx student success. In collaboration with various campus and community partners, Lilly is committed to improving retention and graduation rates for Latinx students by applying research-based best practices and models. Elisa Aquino is the program coordinator at the Chicanx Latinx Student Success Center. Elisa received her bachelor degree in Latin American Latino Studies and Sociology from the University of California, Santa Cruz in 2017. !Que Ondas! My name is Yesenia Guzman. I am a first generation Mexican-American, born and raised in San Francisco, California. I started at SJSU three years ago, straight after high school, and look forward to graduating in 2022! My goal at Centro is to create Comunidad within SJSU by cultivating meaningful relationships with peers, professors, and other faculty members. As a Student Success Leader, my purpose is to support and empower other students to succeed in their journeys throughout college. One of my greatest passions is dancing, especially to Regional Mexican and Latin Pop music.

Hola todos! I was raised in the city of Concord and am a product of Mexican immigrants. Because I had an unconventional academic path, I was fortunate enough to have met many wonderful and influential individuals in my life. It is because of these relationships that I hope to be not just a role model, but a provider of resources and aid. I like to laugh so let me hear your best joke. As a Student Success Leader, my goal is to continue the remarkable work of past Student Success Leaders and foster a safe space where students may come to seek resources or simply relax.

Hey Spartans! My name is Ashley Guerrero, my pronouns are she/her/hers and I am currently a junior majoring in Political Science with an intended minor in Public Administration. Even though I grew up in Livermore CA, only a short commute from here, the communities were quite different. It was a complete culture shock to come to a school where I felt like I could actually build community and I found that within the Centro. Being a first-generation college student, it took me a while to learn how to navigate this campus, but I had a lot of help from friends and resources provided to us through places like the Centro. After finding that sense of community and space which was my home away from home, I knew I wanted to be involved and continue to pay it forward. My experiences have motivated me to become someone who wants to create a space on campus for diversity and inclusion by integrating social justice-based advocacy through the facilitation of a variety of events and programs. Look out for future events in which you can learn and engage with other students just like you, you'll never know until you give it a shot. I am a San Jose native and a transfer student majoring in Industrial Design. Fun fact about myself: I am an artist, and my artwork deals with social issues affecting Silicon Valley while my poetry describes my first-hand experience growing up in California as a Chicano with vitiligo grappling with love, anxiety, and self-fulfillment. My forms of art are through different mediums such as graphic and industrial design, illustrations, technical drawing, music, photography, video, and walls. 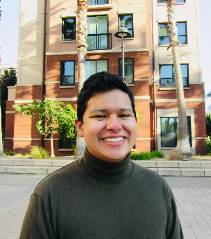 Hola Todxs!! I am a first generation college student originally from Lancaster, California but my heart is from Guadalajara, Mexico. I am very excited for this to be my first year as a Student Success Leader here at Centro. I decided to work at Centro because I have a passion for advising and being a resource to fellow students. I always want mi gente to succeed and what better way to see that than by working at Centro and be part of Latinx success stories. I am an Aquarius which means I am passionate about social justice, like to daydream and enjoy a challenge. I hope to get to know as many of y'all as I can and Adelante! Si se puede!