From Teddy Bears to Television 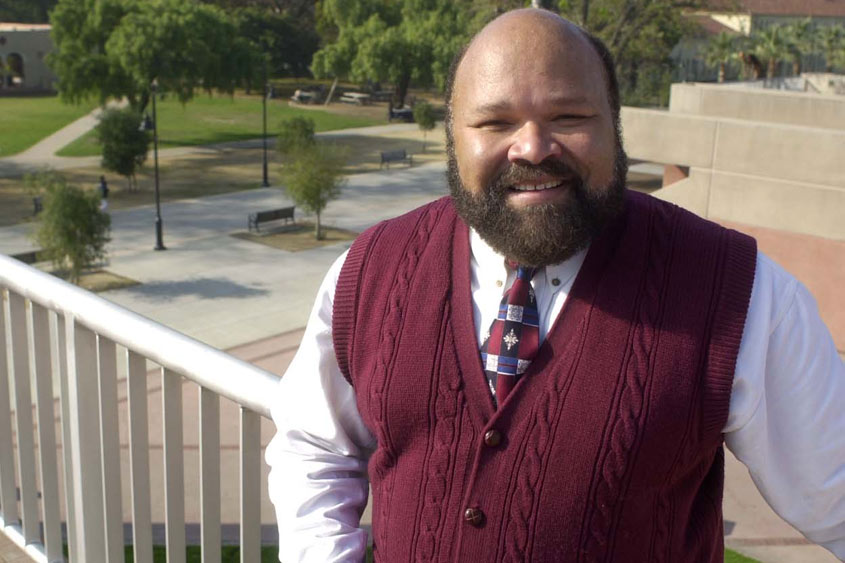 As a child, Bob Rucker would often prop up a blackboard in the basement of his family's South Side, Chicago, home to teach to an audience of teddy bears before heading upstairs to watch the nightly news with Walter Cronkite. It comes as no surprise that more than 50 years later the emeritus professor of journalism and mass communications at San José State continues to facilitate conversations about the media, diversity and inclusion and critical news consumption.

Rucker inherited his passion for the news from his parents, who placed a high value on following and understanding the news.

“My mother and father never finished high school, but they were very big on reading the newspaper and watching the news,” Rucker recalls. “My mother always stressed the importance of knowing what’s going on in the world because it can be applied to whatever job you have.”

This perspective came in handy years later when Rucker joined his friend’s radio show at Northern Illinois University to read the news at 6 a.m. every Sunday. A journalism professor heard Rucker’s voice on the radio and invited him to contribute to the campus television news program.

That single gesture redirected Rucker’s career, which included stints as the CNN National Correspondent in San Francisco, a medical reporter for Group W Westinghouse in Philadelphia, and a national news TV producer and reporter for Newsweek Broadcasting in New York City. In 1979, Rucker was a weekend news anchor for KYW-TV in the Delaware Valley, where he covered the Three Mile Island nuclear accident and met and interviewed Pope Saint John Paul II during his first papal visit to the United States. Both experiences reinforced his belief in the power of news to educate, inform, protect and inspire.

When he suffered a heart attack at age 29, his career took an unexpected yet promising turn, which led him to pursue a master's degree in journalism and eventually teaching. It did not take long for him to fall in love with the profession. For Rucker, teaching journalism means recognizing potential, much in the way his own professor had done for him years before.

In 1990, Rucker felt the pull to go west and accepted a professorship at SJSU. During his 30 years at the School of Journalism and Mass Communications, Rucker watched the Valley of Heart’s Delight transform into Silicon Valley, a hub of innovation, technology and entrepreneurship.

As the news landscape shifted from print media to broadcast television and radio, and now social media and online news, Rucker has stressed the importance of truth-telling, regardless of the medium. He has mentored hundreds of aspiring journalists and broadcasters, many of whom he remains in touch with to this day.

Through his coordination of the Hearst Award, given annually to outstanding media professionals in journalism, public relations, advertising and mass communications, Rucker has brought leaders such as former White House correspondent Jim Acosta and Dr. Anthony Fauci, director of the U.S. National Institute of Allergy and Infectious Diseases, to speak on campus and online.

Rucker’s accomplishments have not gone unnoticed. On February 19, 2021, California Assemblymember Ash Kalra knocked on Rucker’s door to deliver an official proclamation recognizing his outstanding career in public service as a professor and broadcast journalist.

“He is not only an outstanding teacher but a leader in our community, who has dedicated his life to uplifting the voices of those marginalized in our community and sharing their stories. Through his journalism classes at SJSU, he has prepared the next generation of students to tackle hard-hitting news through a critical and compassionate lens. I am honored to know Bob."

Moved as he is by the recognition, Rucker says that the highlight of his career are his students. As much as he has transformed their careers, they have, in turn, transformed his.

“My fondest memory of San José State will always be the audience from around the world,” he says. “I’m talking about people who have enrolled at SJSU over the last 30 years and represented every culture in this world—their families, their traditions, their values, their cultures, their religious beliefs, all those wonderful things that inspire me to get up every day.”