Eyes to the Martian Sky 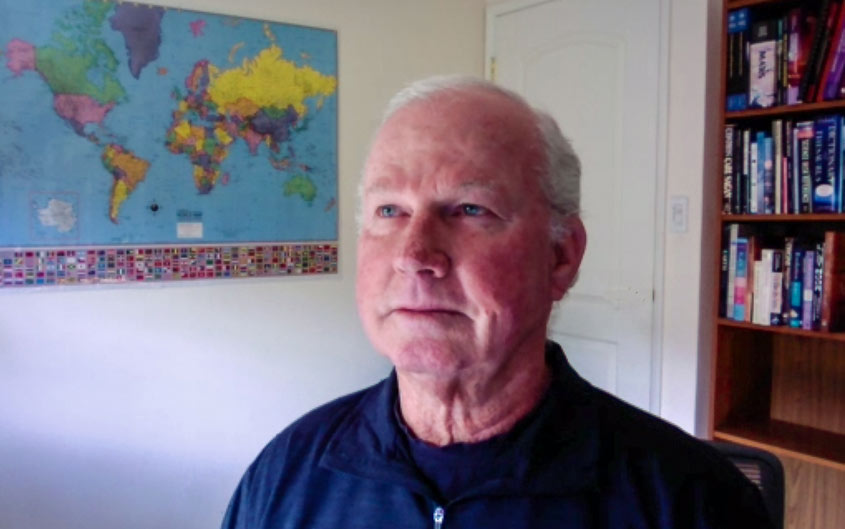 When the Perseverance rover landed on Mars, Bob Haberle knew exactly how the team of scientists and engineers who got it there must have felt—because he’s felt it himself. In his 38-year career with NASA, the San José State University alumnus has been part of four Mars missions, studying the red planet’s atmosphere and even helping develop a cutting-edge model for predicting weather patterns.

“There’s nothing quite like it,” said Haberle, '74 BS, '75 MS, Meteorology. “There’s a lot of tension, and you feel a lot of pressure hoping things go right. When you succeed, it’s exhilarating.”

Haberle’s years of gathering and interpreting data have led to a better understanding of Mars’s winds, temperatures, dust storms, clouds and even climate change.

But long before he had any interest in the extraterrestrial, Haberle was studying a more local weather system: Earth’s. He earned both a bachelor’s and a master’s in meteorology at San José State in 1974 and 1975, respectively.

Choosing meteorology was rather serendipitous—and Haberle is not afraid to admit that the first time he heard the term, he guessed it was the study of meteors. Luckily, his then girlfriend (now wife), Jovita Haberle, '72 Social Science, '91 MA Education, knew a bit more about the discipline and encouraged him to give it a try.

After all, Bob Haberle thought he might one day want to become a pilot, and a basic knowledge of weather systems could come in handy. Then, while working on his master’s, something happened that transformed Haberle’s plan entirely.

“I found a preprint of a paper about the atmosphere of Venus, and it suddenly dawned on me that other planets had atmospheres, and they’re a lot different from ours,” he remembered. “I thought, wow, wouldn’t it be fun to study those and how they work—and then compare them to Earth’s atmosphere?”

He brought his newfound interest to his thesis adviser, Chris Riegel, a faculty member in the meteorology department. Riegel immediately connected him with James Pollack, a scientist at NASA’s Ames Research Center, who guided Haberle on writing his thesis about dust storms on Mars.

That marked the beginning of a career in deep space exploration and discovery.

After earning his PhD at the University of Washington, Haberle returned to NASA at Ames, where he first used his SJSU meteorology training to find a new way to predict the weather on Mars.

In the same way a pilot needs to know the weather conditions before landing a plane at a destination, NASA scientists needed to know Mars’s weather before rovers entered the atmosphere at their landing sites. Haberle started working with Pollack on a model that could make those predictions back in the mid-'70s and continued after Pollack’s death in 1993.

“At the time, it was the only model in the world that could predict the weather and climate of Mars, and we used it to predict winds, temperatures and pressures at the Viking, Pathfinder and Curiosity landing sites,” Haberle explained.

His ideas and data analyses—from Pathfinder, the first ever robotic rover on Mars, to Curiosity, which is still gathering data today—have helped scientists all over the world understand the planet's atmosphere and climate.

He has helped show that storms on Mars can cross the equator (it was speculated before, but Curiosity proved it). The thin clouds in the atmosphere play a larger role in warming and cooling the planet than first thought, and climate change most certainly occurred, paving the way for the Perseverance to search for signs of ancient life.

As far as his weather prediction model goes, it has inspired the development of many more like it around the world. Today, about a dozen or so exist, Haberle noted.

“I think it’s fair to say that my San José State training in meteorology helped me develop a world-class model that led to the establishment of a national treasure that continues to make new discoveries, pioneer new areas of research, attract students and postdocs—and provide educational inspiration for future generations.”

Nowadays, Haberle works for NASA part-time. But his enthusiasm for his job may be as strong as it was back when he first laid eyes on that paper.

“It’s quite spectacular,” he said. “It really raises the goose pimples, you know? You realize this is what human beings are capable of doing.

"It’s a good thing, exploring our universe, meeting the challenges associated with that, acquiring knowledge and improving our understanding of where we are. It’s all very cool. It’s part of an enterprise that benefits humanity in the end.”

Launched → Dec. 4, 1996
Landed → July 4, 1997
Haberle helped determine the tools and equipment Pathfinder would need in order to analyze Mars’s atmosphere and climate. Then, he interpreted data as Pathfinder sent it back.

Launched → Nov. 26, 2011
Landed → Aug. 5, 2012 (ongoing mission)
Haberle collaborated with scientists from Spain in designing the meteorology instruments to further study Mars’s atmosphere and played a role in the operational aspects of the mission.