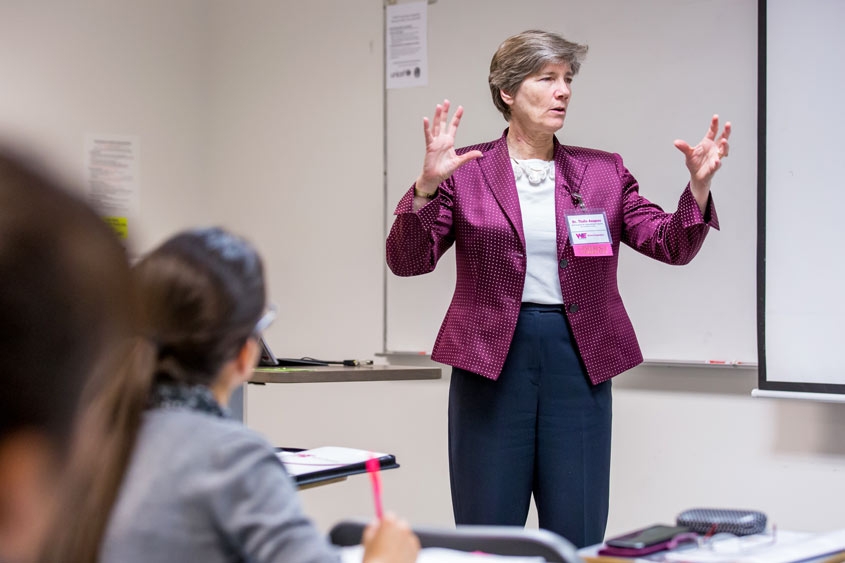 Thalia Anagnos shares how relationships — and a little bit of serendipity — transformed her career trajectory.

Anagnos is part of a select group of more than 40 emerging and executive women honorees who were celebrated at their 37th annual awards ceremony in May. The recipients, according to the YWCA’s recent press release [pdf], “have excelled in their fields and have made significant contributions to Silicon Valley through their dedication and leadership.”

The Tribute to Women Awards has recognized more than 1,400 women for their remarkable achievements at work and in their communities. Anagnos has not only made substantial contributions to San José State in her career, but she’s also repaved the path to university leadership.

Anagnos started at San José State as a general education advisor and assistant professor in civil and environmental engineering and taught for more than 30 years before her transition to administration. Over time, she has been involved with numerous committees and held a variety of other roles, including chair of the civil and environmental engineering department, SJSU’s first director of assessment, associate vice president of graduate and undergraduate programs and, currently, as vice provost for undergraduate education.

Presently, she oversees curriculum development and assessment of general education and undergraduate programs, as well as SJSU’s articulation agreements with the state of California’s community college system. She also supervises the university’s accreditation, academic program catalog, academic scheduling and e-advising, and coordinates some student success programs.

“Being a member of SJSU all these years has been really fun because of the variety of opportunities that working at a university provides such as research, teaching, working with the community, collaborating with other universities and mentoring students and colleagues,” said Anagnos.

The strong roots she’s built at the university over time have made all the difference in the impact she’s made in leadership and directly with students.

“Having those relationships with people across campus has helped me to do the work I need to do — and learn what I need to know to help me change and grow,” she added.

When Anagnos first came to San José State back in the 1980s, there were not many women in engineering — there was a woman president of the university at the time — but she appreciates how that has changed over the years.

“We’ve had multiple engineering deans that are women, and many members of the college leadership are now women,” said Anagnos. “To see that progression has been really fulfilling. It makes me feel good because we worked pretty hard to make that happen.”

Her own career path and leadership have been more serendipitous. For example, on her first day as a master’s student at Stanford University, she was recruited by a professor to work on a high-level research project because the work aligned with what she had written in her statement of purpose for the program’s application.

Later, while in her PhD program at Stanford, a different professor who also taught at San José State in the civil engineering department alerted her to an open teaching position at SJSU and encouraged her to apply.

“I'm pretty sure he advocated for me in terms of getting the position,” she said. “I don’t think if someone hadn’t tapped me on the shoulder I would have actually applied.”

Fresh out of graduate school, once again happenstance intervened: The civil engineering department chair encouraged her to serve as an advisor in the university’s General Education Advising center in addition to her assistant professorship, which turned out to be the perfect professional development opportunity.

Every week, the advising center would bring someone in from a different campus office, introducing Anagnos to the many different services, particularly related to student success, that existed on campus outside of her College of Engineering.

“Not many assistant professors at that time had such an opportunity,” she added. “That led to a lot of other different opportunities during my time at San José State.”

One of those roles involved assessment of the civil engineering curriculum for engineering accreditation, which laid the groundwork for her eventually becoming the university’s first director of assessment on campus.

“I think the greatest thing that happened to me in that director of assessment position was that I met people all over campus because I had to visit every single department and talk to their department chairs,” she recalled. “It gave me a great understanding of the real breadth of our curriculum across the campus.”

In retrospect, Anagnos realizes that her path to leadership in a university environment was unplanned. She certainly did not expect to change from teaching to administration after 30 years, but San José State is not your typical academic institution.

“We are a powerful place,” she said. “When you think about what we have to offer as a university, it's pretty amazing. And, it’s been pretty fun in between [all the roles] I’ve had.”

Testing the performance of a wood beam during a class in the Civil Engineering Materials Testing Lab (early 1990s).

Anagnos’ area of research is earthquake engineering, which is what she started working on in that first project at Stanford. Her particular expertise is in the area of risk — like if we have a big earthquake, what’s the probability that the Bay Bridge will be damaged and need repair?

At one time, she was also president of the Earthquake Engineering Research Institute, a worldwide organization dedicated to reducing losses in future earthquakes.

“In one of my earlier projects in the ’90s, we developed a software called Hazus, which was adopted by FEMA, and they use it whenever there’s a large earthquake to estimate the amount of disaster relief funding they need to ask of Congress,” explained Anagnos.

“It’s based on geographic information systems and combines all types of geologic, building performance, and other infrastructure data with economic, demographic and social data to model potential consequences of an earthquake.”

Being at San José State opened up several opportunities for Anagnos to expand her work. She’s collaborated on numerous projects within the engineering community here, at UCLA, UC Berkeley and Stanford, among others.

One of them involved a $100 million multi-university earthquake engineering laboratory proposal funded by the National Science Foundation through Purdue University. As their director of education and outreach, Anagnos was charged with developing an education program for kindergarten through 16-year-old students, and she ran a summer research experience for undergraduates from all over the country for five years.

“It was an amazing experience for me because the students were mostly underrepresented, and they were doing their research at the different labs around the country, so we had to use online collaboration tools,” she said.

She also continues to work on a project with two women faculty members at Stanford, Sheri Sheppherd and Sarah Billington, related to an engineering textbook they wrote together some years ago. There aren’t a lot of engineering textbooks written by three women — nor, when this was written, were there many equipped with an online interactive platform to practice solving problems and watch instructional videos.

The three are working to create an updated version of the accompanying virtual component. Eventually, they hope to write the next edition of the text with even more real-time examples that a broader group of students can relate to.

“We tried to think of it honestly, from the perspective of inclusion,” she explained.

“A lot of the illustrations we drew included people of color, and we tried to incorporate examples of things that you might be more familiar with: things in the kitchen, things that you do every day, or concepts like how our bodies work. We tried to make the book one that would excite non-traditional engineering students and underrepresented groups into engineering.”

Yet, for all of the roles she’s held across her career, one that she is exceptionally proud of is not research-related at all.

Nurturing the next generation

When Anagnos’ daughter was in kindergarten, another mother approached her to start a Daisy troop, and she was game. Once she got involved, she really saw the value in it and ended up leading a Girl Scout troop for 12 years.

“I was really interested in seeing young women develop into independent beings, especially when I started seeing this as an opportunity for my own daughter and her friends to develop themselves as strong leaders,” shared Anagnos.

She had already worked over the years to get more young women in STEM, helping propel San José State’s Expanding Your Horizons program, which was a conference to get young women, grades six through 12, interested in careers in science, math and engineering. Nurturing future leaders through Girl Scouts was a natural fit.

“What I really loved about Girl Scouts was that they're all about developing leadership in young girls and transferring the leadership responsibilities from the troop leaders to the girls,” she said. “Almost every single one of those girls has gone on to do something amazing.”

Likewise, Anagnos said her mother, who was a strong leader, single mom, school teacher and community activist, always inspired her to do her best in whatever endeavors she chose.

Anagnos recounts a memory of her after she passed:

I found this picture of her when she was in her 90s. She would go to the high schools in Eastside LA and try to tell the kids that they don't have to sign up for the Army. These recruiters would go to all these schools with lots of Black and brown kids who don’t have a lot of income, and my mom was part of this group who protested this with her little sandwich board on, saying, ‘You don’t have to join.’ That's just who she was. She was just always out there making the world a better place." 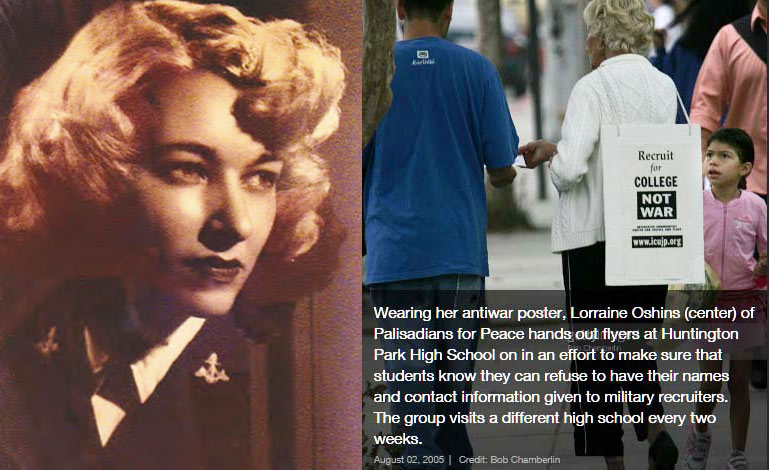 (Left) Anagnos' mother Lorraine Oshins during WWII while working in the code breaking office in Washington DC; (right) Oshins at the age of 92 still advocating students consider alternatives to joining the military.

Those same words could be used to describe the impact that Anagnos has had on others, especially young women and underrepresented students, throughout her storied academic career — one she clearly cherishes for its invigorating variety.

“When I’ve talked to people about why would you want to work at a university, I’ve said one of the things I've loved about it is that every day, every year, is different.”