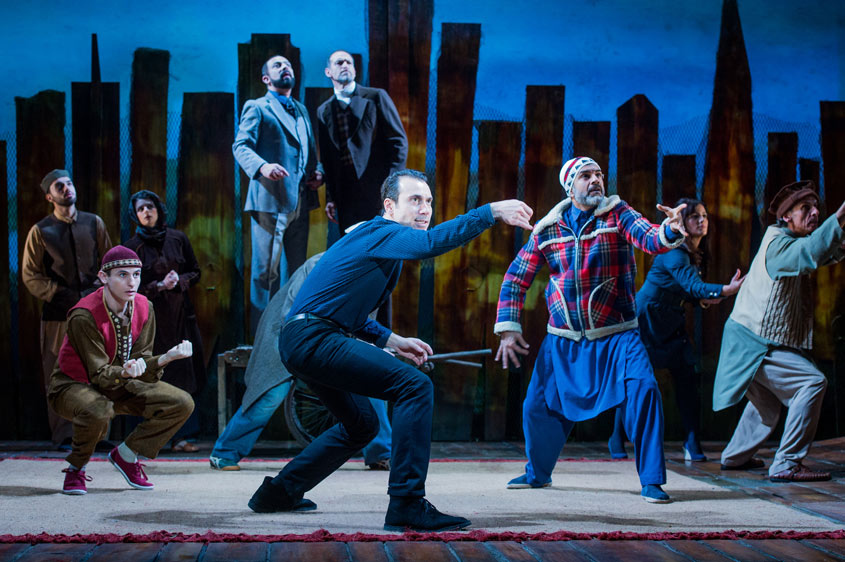 When the COVID-19 pandemic hit in March 2020, San José State Communications Studies Professor Matthew Spangler had five plays in production and another four in pre-production around the world.

It was heartbreaking for the playwright, academic and professor to pause and, in some cases, cancel production. Spangler mourned the lost opportunities to collaborate in person with actors, directors, and theater companies across the globe, and even more so, to engage in dialogue with theatergoers and artists alike. The pandemic forced him to find creative ways to work with partners internationally without seeing them in person.

In addition to this, Spangler, like so many others, had to pivot his SJSU curriculum to a fully online format. He faced a challenge: How could he evaluate the performative work of his students if he could not watch them perform face-to-face?

Though his students could not gather in person in San José, operating entirely online opened up opportunities to collaborate with artists worldwide.

Spangler reached out to colleagues in the United Kingdom and paired SJSU students with theater students at Manchester Metropolitan University. They had to find performative ways to explore and share the concept of “home” with artists thousands of miles away. Students in Manchester and San José then recorded their projects from their own homes or while walking or driving around their cities.

“As a group, we all connected to the idea that home isn’t just a physical place—it’s found where the people are, family and friends in particular,” said Maddie White, ’21 Communications Studies, who met her British collaborators in Spangler’s class.

“We are developing this into a video project that not only maps out what home means to us, but also follows the timeline that has developed into this nostalgic feeling of home.” 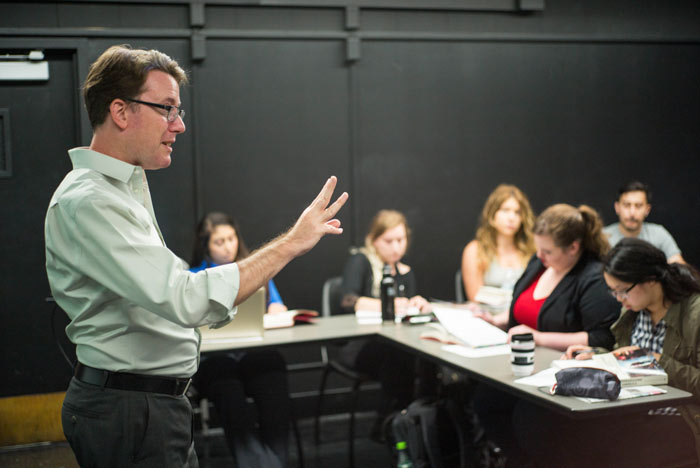 Spangler made San José State his home in 2005, when he was hired to establish a performance studies curriculum within the Communications Studies Department. He said the university “has provided a remarkably good home for this program because of the size and diversity of its population.”

“San José State has racial diversity, economic diversity, diversity in ethnicities and academics,” said Spangler. “Performance studies is well suited to this type of diverse classroom because when you have a diverse mix of people, you realize that what really unites them, no matter where they come from or what their background, is that they all tell stories.”

The son and grandson of judges, Spangler’s original plan when he was young was to study law, but as an undergraduate at Northwestern University, he became intrigued by the stories of immigrants, undocumented people and refugees. He volunteered with an organization that helped settle Russian immigrants in Chicago.

Once a week for three years, he visited Russian families in their new homes, helping orient them in the United States. Spangler did this with three different families (one family per year)—and the experiences forever shaped his artistic and academic perspective.

At Northwestern, Spangler took performance studies courses that changed the trajectory of his career. For the first time, he envisioned how he could combine his interest in social change with a desire to share meaningful stories.

“Performance studies is a way of using live performance in all its forms that can be brought to bear on topics of social significance,” said Spangler. “It’s a way to engage topics like immigration or social exclusion, gender and racial equity through the performing arts.”

While pursuing his master’s degree at Trinity College Dublin in Ireland, many of his friends and colleagues were immigrants from around the world who were united by a desire to tell stories.

Inspired both by their personal stories and work in performance, Spangler became fascinated by the intersection of immigration and theater.

His scholarship explores the meaning and significance of creating performance about immigration on an international scale, from adapting literature on the immigrant experience and writing about modern dance performances with refugees and asylum-seekers to performing immigration and street art in Ireland.

Both his studies and his creative work ask big questions about immigration, authorship and authenticity. How are these stories told, by whom, and in what ways? How does the flexibility of performance allow for an even wider array of cultural narratives? And what impact can these stories have?

Spangler’s theatrical works include Albatross, an adaptation of Samuel Taylor Coleridge’s “Rime of the Ancient Mariner” (New York off-Broadway); The Forgotten Empress, based on the true story of the Persian refugee-turned-Mughal-empress Noor Jahan (Lahore and Karachi, Pakistan); and an adaptation of T.C. Boyle’s Tortilla Curtain (San Diego Repertory Theatre).

Many of his plays have been produced worldwide, though few are as well-traveled as his award-winning adaptation of Khaled Hosseini’s 2003 novel The Kite Runner, which tells the story of an Afghan refugee family who moves to the San Francisco Bay Area. The play had its first production at San José State University in 2007, a professional premiere at the San José Repertory Theatre in 2009 and was later produced on London’s West End, the Dubai Opera House, and on tours in Ireland, Germany, Canada, India and the U.K.

His latest play, Striking Back, was presented in October as part of the prestigious Dublin Theatre Festival in Ireland. It tells the true story of an anti-apartheid strike in Dublin led by grocery store clerks in 1984 that resulted in a national ban of South African products.

Spangler is currently at work on a theatrical adaptation of Christy Lefteri’s novel The Beekeeper of Aleppo. He is also writing a book that examines how theater productions have sought to represent refugees and asylum seekers on stage, taking a methodological approach to documentary theater, adaptation of literature, oral history and interview-based theater, and various forms of dance.

His career in academia is as celebrated as his tenure as a playwright and director. This past spring, SJSU President Mary Papazian named him the 2021 President’s Scholar in recognition of his creative and scholarly work. Spangler said that receiving this honor during the pandemic, a year that has wreaked havoc on the theater world, “is a testament to the humanity of this university.”

“I see the literary and performing arts as fundamentally human,” he says. “If there’s one thing that makes us different from almost all the other living creatures on this planet, it’s that we create stories through art. Storytelling enables us to see things differently—in a way that I think nothing else really can.”